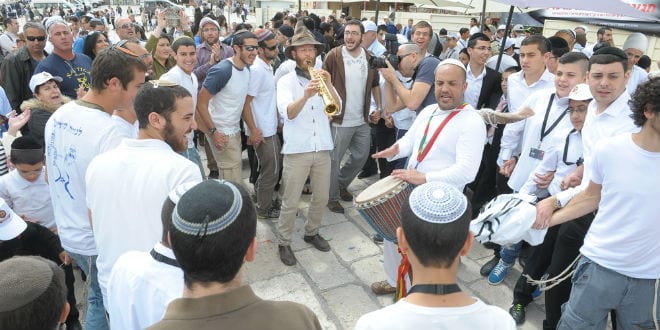 This story comes from David Goodman, who made aliyah in 1984 from London and lives in the Greater Jerusalem area.

One of my jobs is to help English-speaking families from abroad make a Bar Mitzvah for their sons at the Kotel (Western Wall) in the Old City of Jerusalem. This involves organizing a lot of logistics. Every family has slightly different needs.

Three years ago, I was working with a particular American family. Their son’s Bar Mitzvah ceremony was scheduled for Rosh Chodesh (the first day of the new Hebrew month). The original plan was that we would conduct the Bar Mitzvah ceremony and then the family would go together to do a tour of the tunnels under the Temple Mount.

The family was coming to Jerusalem from Tel Aviv, which normally takes about an hour. They got caught in traffic and arrived quite late. By the time they arrived at the Kotel plaza area, there was no time to do the Bar Mitzvah ceremony and still make their appointment for a guided tour of the tunnels. So we decided to reverse the order of the day and I sent them on the tunnel tour first.

The family consisted of the Bar Mitzvah boy, his mother, father, uncle and sister. Including me, there were not enough for a minyan (a quorum of 10 men required for traditional Jewish prayer). Two tables up from where we settled after the tunnel tour, I spotted a large group, all one family, also from the US. I saw they were finishing their own Bar Mitzvah service, so I went up to them to ask if they could help us make our minyan so we could conduct the Bar Mitzvah.

As the service was concluded, the two happy families started chatting, as people do

“Where do you live?” the mother of the original Bar Mitzvah boy asked.

“We live in New York,” answered the father of the second family.

“What do you do?” asked the mother of the original Bar Mitzvah boy

“I’m a rebbe (teacher) in such-and-such yeshiva (school of Torah study for boys).”

The mother’s mouth dropped. She had been trying to get her son into that exact school. Now, these two families, who lived just blocks apart from one another, traveled halfway around the world to meet in Jerusalem. Not only that, but the schedule of the first family had to go off in order for these two families to connect, all so one boy could study Torah.