Message From the Next World Comes to Israeli Mystical Rabbi, Warns of Imminent War

Home » Message From the Next World Comes to Israeli Mystical Rabbi, Warns of Imminent War 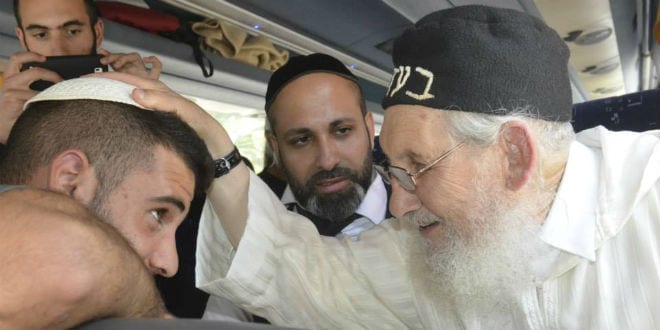 For three and a half hours this past Saturday night, Rabbi Amram Vaknin, a 76-year-old Israeli mystic, fell to the floor as he received a warning from the next world.

From approximately 9 PM until 12:30 AM, in his modest home in the port city of Ashdod, Rabbi Vaknin was cautioned that war is coming to Israel very soon, the rabbi’s student revealed to Breaking Israel News.

The most recent revelation from Heaven was given over to the rabbi from a small group, including the prophet Elijah and his own deceased rabbi, Rabbi Moshe Zrihan, along with Rabbi Vaknin’s father and grandmother.

Nachman recounted the specifics that Rabbi Vaknin received in the message. “The Muslims are going to contaminate the water, the fruits and vegetables.They are going to damage the electricity,” he said. “And there are going to be people dying in the streets, thousands of people all over Israel.”

Nachman urged that the Israeli water company, the electric company and food importers should be prepared for these attacks.

According to Nachman, Rabbi Vaknin was told that Arab citizen of Israel and Member of Knesset Hanin Zoabi is the one planning it. Vaknin stated his belief that Zoabi is a spy for ISIS and Hamas and is providing the terror groups all the information they need to plan the attacks.

Why is this happening? According to Nachman, it is because the leaders of the generation “don’t want to do teshuva (to repent). They aren’t waking up. Hashem (God) wants to lead them in the right path. We all need to do teshuva.”

Nachman said that in the past, Jewish leaders such as Moses and King David knew about decrees against the Jewish people before they happened. These great leaders took it upon themselves to repent first, but the leaders of today are telling others to repent without doing it themselves.

“Our weapon is not Tzahal (IDF), not Netanyahu, nobody. Only teshuva,” Nachman urgently told Breaking Israel News.

When asked what Rabbi Vaknin said people should concentrate their repentance on, Nachman mentioned four things. Repent for “the inner sins that you hide away from people and the sins that people see. And kibud av v’eim (honoring your father and mother) is one of the most important things. And always say the truth of what’s in your heart. Be real. It’s all about emet (truth).”

“The war is very close. We have no choice. The teshuva of Am Yisrael (the Jewish nation) will determine the rachamim (mercy). But war is definitely coming,” Nachman insisted. “We beg Am Yisrael to do teshuva as soon as possible, because we don’t want to see people dying. Stop thinking about material things. That’s not going to give you life. When Moshiach (Messiah) comes, material is not going to mean anything to anybody.”

“We’re getting close to the big day of Moshiach. Before that happens, Hashem wants us to do teshuva. We have to be ready and prepared,” pleaded Nachman. “When we do real teshuva, Hashem will fight for us.”

Nachman concluded by recounting a teaching from the Talmud, the primary source of Judaism’s rabbinic tradition. The eagle approaches his baby eaglets in the nest very slowly. He makes sure that they notice him gradually, so as not to shock them, because they can die from such fear. Similarly, God does not want to hurt us. He’s warning us to wake up because He’s about to rule the world, so He’s warning us little by little, in order that we recognize His approach. Every earthquake, every terrorist incident, every battle, is a warning to wake up.

Through previous messages from Heaven, Rabbi Vaknin accurately predicted the “Gaza Freedom Flotilla” in May, 2010, the deadly fire in the Carmel forest in December of 2010 as well as Operation Pillar of Defense in 2012 and Operation Protective Edge in 2014.