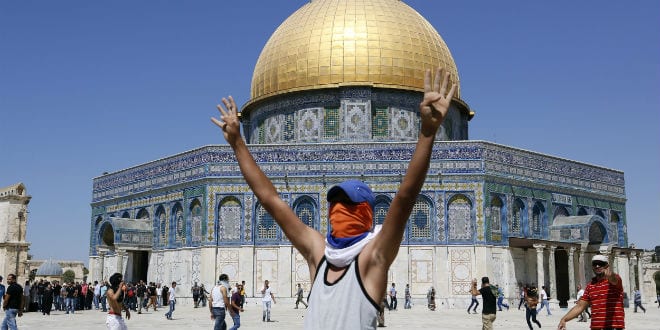 Glick, founder of the Temple Mount Heritage Foundation, called on Erdan in a personal letter to deal with two Muslim groups – the Morabiton and Morabitat – who harass Jews and Christians on the Temple Mount, hindering their access to the holy site. Erdan took up Glick’s request and contacted Israeli Defense Minister Moshe Ya’alon, urging him to outlaw the two Muslim groups.

The Internal Security Minister asked Ya’alon to declare the organization’s “illegal groups” in accordance with the authority of the Minister of Defense according to Defense Regulation 84. Enacting this regulation would give law enforcement forces broader powers to cope with the violent actions of the groups.

Hundreds of Muslims, both male and female, are paid by the Waqf, the Jordanian-backed Muslim trust in charge of the Temple Mount compound, and the Northern Branch of the Islamic Movement to physically and verbally harass non-Muslims who ascend the site.

Glick, who advocates for universal access and prayer on the Temple Mount for people of all religions, wrote in a letter to Erdan that Israel must put a stop to Muslim “violence” taking place each day on the holy site.

Exemplifying the “violence and intimidation” of the Muslims, Glick noted that because of his activities to open up access on the Temple Mount, he was shot by a Palestinian terrorist four times in an assassination attempt in October 2014.

Currently, police procedures on the Mount are much stricter for Jews than for non-Jewish tourists, which Glick pointed out is in direct violation of legal rights. Jews are subjected to longer wait times to ascend the Mount, rigorous searches and identity checks. In addition, there is only one entrance for Jews and it is open a limited number of hours.

Despite a Jerusalem Magistrate court ruling involving Glick which ruled that Israeli Police must ensure the rights of Jews to pray on the Temple Mount, access to the site remains a highly controversial and volatile issue. Glick demanded the establishment of a joint committee of religious Muslims and Jews to arrive at practical solutions to these issues.

Despite the onging controversy over the Temple Mount, Glick praised Erdan’s efforts to “promote the process of outlawing these inciters” from the holy site, which previous ministers have failed to do.

“For the past three years we, my friends and my fellow activists from the Temple Mount Heritage Foundation, have been trying to raise awareness of the violence on Temple Mount,” Glick told Breaking Israel News. “The previous minister refused to meet with us! We put the subject on the table again and again on the committees of the Knesset.”

“As soon as Erdan entered office we requested a meeting. He had met with us three times ever since. We presented him with the facts and he got the point and promised to promote the process of outlawing these inciters. We also met with Justice Minister Ayelet Shaked who promised to be a partner in Erdan’s efforts,” Glick explained.

“Last week I met with the prime minister, who told me specifically that if Erdan makes the step, he will back him. The first important step in the right direction has been made. Now we hope we are on the path for true freedom and human rights for all on the Temple Mount.”

In recent weeks, the situation on the Temple Mount has been escalating, with Muslims targeting Jews and Christians alike. Recently, a delegation of visiting US Congressmen were harassed by the Muslim Morabiton and Morabitat groups. Last week, a Jew was violently attacked on the Temple Mount, resulting in injuries.

Glick has also sent a copy of his letter to Israeli Prime Minister Benjamin Netanyahu. However, there has yet to be a response from the Prime Minister’s Office.