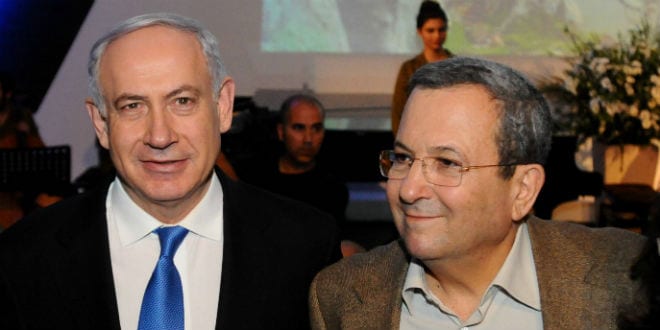 The information was aired on Israel’s Channel 2 on Friday night, in recordings that Barak attempted to block from broadcast. Israel’s military censors, however, allowed Channel 2 to play them.

According to the report, Barak said he and Netanyahu sought plans to order the Israeli Air Force to strike Iran on several occasions. However, in 2010, then IDF chief of staff Gabi Ashkenazi said the army was not ready for such an operation and rejected the idea.

In the recordings, Barak is heard stating: “Ultimately, you need the IDF chief. The IDF chief has to say that there is operational capability. We gathered in a side room, just a small group; there were 30 people in the discussion and in this case we had a very small group – the prime minister, defense minister, foreign minister, chief of staff, the head of Mossad, the head of Military Intelligence, the head of the Shin Bet [domestic security service]. In this forum we actually wanted to know what the situation was. The answer [from Ashkenazi] was not a positive one… when he was pushed into the corner.”

According to Barak, without the support of the head of the army, a discussion on any possible military strike became impossible. “He created an untenable situation,” Barak said in reference to Ashkenazi. “You cannot go to the Cabinet when the chief of staff says to you, ‘I’m sorry but I told you no.’”

In February 2011, after the appointment of Benny Gantz as the new IDF chief of staff, Gantz was open to exploring a military operation against Iran. Following a meeting at Mossad headquarters, Barak was confident that a “forum of eight” senior ministers could be garnered to approve a strike.

However, cabinet ministers Benny Begin, Eli Yishai, Dan Meridor and heads of the Shin Bet, Mossad and almost all the IDF’s top leaders opposed a strike.

“Gantz said the capability was there, you know all the limitations, everything, all the risks,” Barak said of the meeting. “Bibi [Netanyahu], me and [Yisrael Beytenu leader and then-foreign minister Avigdor] Lieberman supported the operation and were ready to present it to the forum of eight…Bibi was supposed to ensure [the support of Ya’alon and Steinitz]…At a certain stage of the consultations, Bibi said they were in favor, it’s okay.”

He continued, “Then we held a discussion on it in the forum of eight. We went there after Bibi told the two of us — Lieberman and me – that Bogey and Steinitz supported [the operation]. The chief of staff lays it all out — all the difficulties, the complications, the complexities and the problems including the possibility of losses — and you see Bogey and Steinitz crumbling in front of your eyes. Either Bibi did not do his preparation or he had misunderstood what constitutes a yes.”

The prime minister and Barak planned the strikes in anticipation of Iran entering a “zone of immunity” that would render its nuclear facilities impenetrable. Currently, Netanyahu has threatened that Israel will act alone to prevent Iran from acquiring nuclear weapons.

Israeli leaders are livid over the recordings, accusing Barak of revealing state secrets. According to a follow-up report on Channel 2, there is widespread “anger” directed towards Barak.

Yisrael Beytenu leader Abigdor Liberman criticized Barak on Army Radio, saying, “More surprising than discussions that were supposed to be closely guarded secrets being publicized and analyzed by the media, is that Barak has broadcast that he is a chatterbox, who is unreliable.”

“This is perhaps one reason, among others, that Iran is supported by the international community, while we, Israel, are swept into the corner.”

According to Liberman, the public should never have been made aware of any discussions of a possible military strike on Iran.

“Of course the public didn’t need to know, let alone five years later. These things usually don’t go out, not even 40 years later. But the disclosure now actually raises a question – how much can Israelis be privy to secrets and should information be shared with them?”