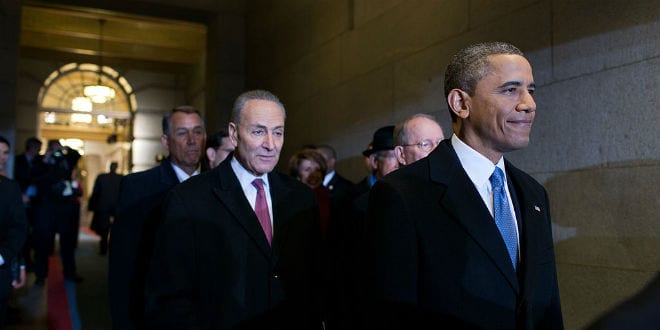 In particular, Schumer’s impending decision on the deal had been the source of intense public lobbying efforts, with Politico reporting that his office received more than 10,000 phone calls from opponents of the deal.

“Advocates on both sides have strong cases for their point of view that cannot simply be dismissed. This has made evaluating the agreement a difficult and deliberate endeavor, and after deep study, careful thought and considerable soul-searching, I have decided I must oppose the agreement and will vote yes on a motion of disapproval,” Schumer said in a statement released Thursday.

While noting that “all fair-minded Americans should acknowledge the president’s strong achievements in combating and containing Iran,” Schumer said that “no one can tell with certainty which way Iran will go.”

“It is true that Iran has a large number of people who want their government to decrease its isolation from the world and focus on economic advancement at home. But it is also true that this desire has been evident in Iran for 35 years, yet the Iranian leaders have held a tight and undiminished grip on Iran, successfully maintaining their brutal, theocratic dictatorship with little threat. Who’s to say this dictatorship will not prevail for another 10, 20, or 30 years?” he said.

Schumer added, “Therefore, I will vote to disapprove the agreement, not because I believe war is a viable or desirable option, nor to challenge the path of diplomacy. It is because I believe Iran will not change, and under this agreement it will be able to achieve its dual goals of eliminating sanctions while ultimately retaining its nuclear and non-nuclear power. Better to keep U.S. sanctions in place, strengthen them, enforce secondary sanctions on other nations, and pursue the hard-trodden path of diplomacy once more, difficult as it may be.”

In a statement obtained by Reuters, Engel said, “The answers I’ve received simply don’t convince me that this deal will keep a nuclear weapon out of Iran’s hands, and may in fact strengthen Iran’s position as a destabilizing and destructive influence across the Middle East.”