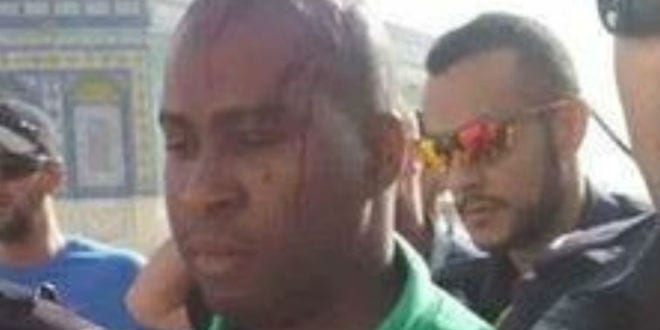 On Tuesday, a deeply disturbing attack occurred on the Temple Mount in Jerusalem. A Christian tourist from France was attacked by Muslims, struck in the head by a rock, drawing blood. While he was lying on the ground being beaten, one of the attackers tried to rob him. His offense? Waving an Israeli flag. Israeli police forces converged on the site and fought off the mob, saving the tourist.

Reports of the beaten Christian actually waving the flag are unsubstantiated by the videos of the event, and it is conjectured that he may have just been visibly carrying a souvenir flag that he purchased before ascending the Mount.

Even more disturbing about this incident was that the victim was arrested by the police. The police stated that a young man “who broke the rules for visitors on the Temple Mount was detained.” He was released soon after.

Palestinian news agency Ma’an News had a different take on the beating of the Christian tourist, spinning the story as an attack on Muslims. The news source identified the French tourist as “an Israeli extremist (who) attempted to raise the Israeli flag over the holy site.” Their version of the story has Muslim worshipers requesting help from the Israeli police and being denied. The “Israeli extremist” attacked them with a “sharp object,” injuring two worshipers.

Tuesday’s attack is just the latest violent incident in a string of recent attacks on the Temple Mount. On Sunday, clashes broke out on the holy site between Israeli Police and masked Palestinian youths who attacked them. The Palestinians held up posters showing an Arab baby who was killed in an arson attack suspected to have been carried out by Jews. Ma’an News reported the incident, saying that, “right-wing Jewish organizations were reported to have called for a ‘return to the Temple Mount,’ urging participants to wear their Israeli army uniforms as they stormed the holy site.”

Currently on the Temple Mount, any form of Jewish worship is forbidden by the Waqf. However, according to a Jerusalem magistrate court’s ruling in March, Judge Malka Aviv struck down the ban, writing her brief that “police must make sure that Jews are allowed to pray on the Temple Mount.”

Aviv added that Israeli police action carrying out the Waqf ban was implemented “without appropriate consideration, was arbitrary, and only out of concern for the consequences of the broadcast.” The judge’s ruling ensures equal freedom to all religions at the holy site, in an unintentional enforcement of the biblical verse, “My house will be called a house of prayer for all nations” (Isaiah 56:7).

Despite the ruling, the de facto, day-to-day reality on the Temple Mount is quite different. The police are not legally permitted to prevent Jews or Christians from going up to the Temple Mount, yet they make it prohibitively difficult for Jews, forcing them to wait hours in the sun, without permitting them access to the water stations located in plain view, or even allowing them to bring their own water or food. The court ruling explicitly permitted equal freedom of prayer for all religions, yet Jews are expressly forbidden and immediately removed if they make any motions that may be seen as being prayer.

Speaking with Rabbi Yehudah Glick, founder of the Temple Mount Heritage Foundation, the international Temple Mount activist informed Breaking Israel News of his dismay that Christians are not permitted to pray at the holy site.

While Christians are not explicitly told to refrain from praying or reciting Psalms, however if they do so, they will be confronted by the Waqf guards and removed from the Temple Mount, despite the court ruling.

Glick explained that “that they don’t come to demonstrate. They come as tourists and aren’t looking to get in trouble.” Unfortunately, one French Christian visitor did not understand that on the Temple Mount, in the spiritual heart of the Jewish State, an Israeli flag is criminal contraband and will get him beaten and arrested.