Modern Day Ingathering of the Exiles Ushering in Ultimate Redemption 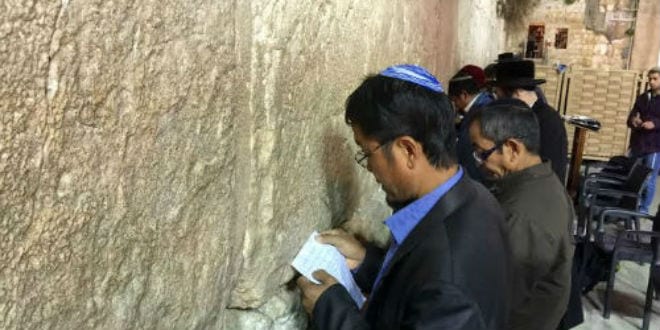 A walk around the streets of Jerusalem can be an eye-opening experience. Jews come in all shapes, sizes, and colors. After 2,000 years of Diaspora, Jews are returning from literally every corner of the globe, bringing with them a genetic, historical, and cultural diversity that is unparalleled by any other nation, except perhaps the United States. The ingathering of the exiles is yet another part of the process of redemption, as promised in Deuteronomy, and in many places in the Prophets (Jeremiah 29:14; Ezekiel 11:17; Isaiah 56:8; Psalms 106:47).

Immigration to Israel is called aliyah, literally translated as “rising up”. For American Jews, that process usually begins with a decision made from the comfort of their home with an established support system from various American and Israeli institutions, such as Nefesh b’Nefesh (“Soul to Soul”), as Breaking Israel News reported recently.

Sometimes, as with Ethiopian Jews, aliyah more closely resembles the Exodus from Egypt. Theirs was a series of massive rescue missions, many of them covert, initiated by Israel, which mobilized its resources to save these long-lost brothers and sisters. Operation Moses, in late 1984, saved over 7,000 Ethiopian Jews and brought them to Israel. In 1991, Operation Solomon brought over 14,000 Ethiopian Jews to Israel in a miraculous Exodus of near-Biblical proportions.

There are other cases of the tribes of Israel becoming so scattered through history that the connection to Judaism was lost in the sands of time, making it very difficult even to locate them.

This was the case in a far-off corner of India, with a group of Jews now known as the Bnei Menashe. They are called this because of their oral tradition that they are descendants of the Tribe of Manasseh, one of the 10 Lost Tribes.

These rediscovered Jews come from northeast India, in an area situated between Myanmar (formerly Burma) and Bangladesh. Also known as the Shinlung, the Bnei Menashe have an oral tradition, passed down for 2,700 years, which describes how the Assyrians invaded the Northern Kingdom of Israel in 721 BCE and took them into slavery.

They eventually escaped slavery and fled to Persia, and then Afghanistan. The Bnei Menashe then migrated toward Hindu-Kush and Tibet, eventually reaching Kaifeng in East Central China around 240 BCE.

It should be noted that there is a small community of Jews in Kaifeng who have mostly assimilated into the surrounding culture. The Bnei Menashe believe that while in China, their ancestors were enslaved yet again.

In 100 CE, the Bnei Menashe were expelled from China and their “leather scrolls” were burned. Some fled down the Mekong River into Vietnam, the Philippines, Siam, Thailand and Malaysia. Others went to Burma and west to India.

In 1894, Christian missionaries arrived in the region. The members of one family, called the Kuki family, recognized the Bible stories of the missionaries as belonging to their own oral tradition and converted, believing they were returning to the religion of their forefathers and of their ancestor “Manmaseh”.

In 1951, a Pentecostal minister named Tchalah claimed to have had a prophetic vision. In the vision, he was told that his people must return to their original land and the religion they came from before the war of Armageddon. He had more visions and eventually wrote a letter to the State of Israel, asking permission to emigrate there.

The Jewish State was still very new at the time, and did not invite the Bnei Menashe to return to their ancestral homeland. Twenty years later, members of the Kuki family began investigating and realized that they were descendents of Jews.

They contacted Rabbi Eliyahu Avichail in Jerusalem, the founder of Amishav, an organization dealing with the dispersed of Israel. He took a strong interest in this very special group of Jews. Evidence of their Jewish roots abound in their oral history, including traditional songs that describe the Exodus from Egypt in detail, including water from a rock and their enemies drowning in the sea.

They also have retained many Jewish customs such as performing circumcision on the eighth day following birth, levirate marriages, offering sacrifices on altars and wearing prayer shawls that resemble the Jewish talit (four-cornered, fringed garment). Rabbinic authorities have ruled their status as “safek Jews” (possible, with a doubt). Since their Jewish status is not clear, or not without a small doubt,  they undergo a conversion process.

The return of the Bnei Menashe to their ancestral homeland is an ongoing process. On June 18, 78 Bnei Menashe arrived in Israel to become reunited with their people and their religion. Their flight was the first in a series of three, sponsored by the Shavei Israel organization, with the expected arrival of two more planes, bringing the total of newcomers to approximately 250.

Over 3,000 of the Bnei Menashe have already returned to Israel in fulfillment of Biblical prophecy while another 7,000 are still in India, waiting to make aliyah. There are approximately 4,000 Bnei Menashe practicing as Jews in northeast India and across the border in Myanmar.

Considering the long and tempestuous history of the Jewish dispersal after the destruction of the Second Temple, it is no surprise that there are many groups that show distinctive signs of having once been part of the Chosen People.

The Pashtuns, also called Afghans, or the sons of Pashtu, identify themselves by their ancient name “Bani Israel”, although they live today as Muslims. Most Pashtuns grow beards and side-curls, like Orthodox Jews. They have a tradition of performing circumcision on the eighth day after birth and also perform levirate marriage. They wear a rectangular, fringeless garment. Pashtuns do not eat horse or camel meat. There is some evidence that they do not eat meat and dairy foods cooked together. The Sabbath is considered a day of rest and they light a candle to honor the day. They acknowledge that they are descended from the Hebrews, but since their conversion to Islam, they consider “Yahoodi” (“Jew”) to be a derogatory word and have a strong hatred towards the Jews.

It has also been suggested that the Kashmiri in northern India are descended from Jews, though this has yet to be thoroughly investigated.

Marrano is a term that refers to Jews who were forcibly converted to Christianity as a result of the Spanish Inquisition. The effects were seen throughout the entire Iberian Peninsula, and though it is not generally known, the Inquisition continued in the New World. Many old South and Central American Churches still have artifacts proving this. The Belmonte Jewish Community in Portugal dates back to the 12th century and practiced Judaism in secret for over 500 years. They now practice their Judaism openly, and in 1996 established a synagogue called Beit Eliyahu.

There is a Hasidic (an Orthodox sect of Judaism) saying that many ships cross the sea and no ship can follow another because they don’t leave tracks. The return to your spiritual roots is a unique and powerful experience. It is a personal journey, but the service of God is traditionally a tie that binds people together. The concept of nation and homeland as an essential part of serving God is slowly returning to the world, and is certainly part of the process of redemption.