Israel’s Trouble with Iran Intensifies “Before the Coming of Messiah” 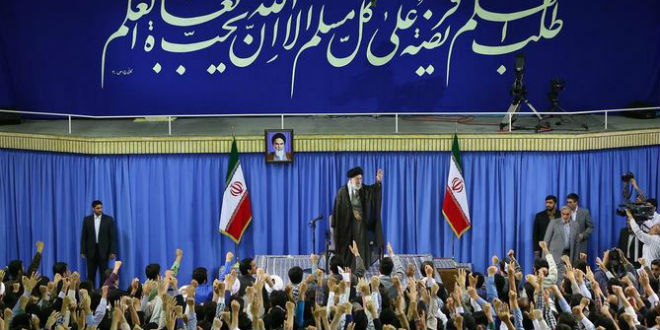 A new book, written by Ayatollah Ali Khamenei, Iran’s supreme religious leader, makes Iran’s plans for the destruction of the Jewish State of Israel very clear. The 416-page book, entitled “Palestine”, leaves no doubt about the Ayatollah’s intention to reclaim Israel from the hands of the Jews. Coming rapidly on the heels of the Iran nuclear deal, this represents an escalation in the threat to Israel from Iran.

This most recent intimidation is yet another example of what rabbis and Jewish scholars have been warning the Jewish people about for centuries. Many famous rabbis have written about the intensification of the oppression of the Jewish people as the End of Days draws closer. This idea is best captured in the writings of Rabbi Yisrael Meir Kagan.

Better known the Chofetz Chaim, the highly influential 19th century rabbi penned important works of Jewish philosophy and law that are still studied today. Rabbi Kagen wrote, “Before the coming of Moshiach [Messiah]… the troubles and persecutions [of the Jewish people] will follow each other so closely that there will be no space between them.”

What is the basis of Khamenei’s most recent menacing comments about Israel? Over 99% of the Iranian population today is Muslim. According to Muslim doctrine, any land that was once under Muslim control must remain in Muslim hands, even if the majority of the citizens are not Muslims.

Beginning with the conquest of Jerusalem by Islamic forces in the 7th century, parts of the Land of Israel were under Islamic rule for centuries. Khamenei’s book announces his intention to regain Muslim control over Israel which, he claims, is not based on anti-Semitism, but on “well-established Islamic principles.”

In a recent article about the book, Iranian-born author and journalist Amir Taheri wrote, “Khamenei insists that he is not recommending ‘classical wars’ to wipe Israel off the map. Nor does he want to ‘massacre the Jews.’ What he recommends is a long period of low-intensity warfare designed to make life unpleasant if not impossible for a majority of Israeli Jews so that they leave the country.”

“His calculation is based on the assumption that large numbers of Israelis have double-nationality and would prefer emigration to the United States and Europe to daily threats of death,” he added.

According to Taheri’s assessment, the publication of Khamenei’s book puts US President Barack Obama and Secretary of State John Kerry in a difficult position, trying to defend an increasingly unpopular nuclear deal with a country whose most important religious leader is openly announcing his goal to destroy Israel as a Jewish state.

Rabbi Avraham Azulai, a well-known mystical rabbi from the 16th century, wrote in his scholarly treatise Chesed LeAvraham that the tribulations at the End of Days, such as these threats of annihilation by Iran, are designed to purify the Jewish people in advance of redemption.

He explains, “The reason for this is that the Divine presence will judge its household, and God will bring them back to the established covenant so as to purify them for the redemption and for the goodness promised to us by His prophets.”