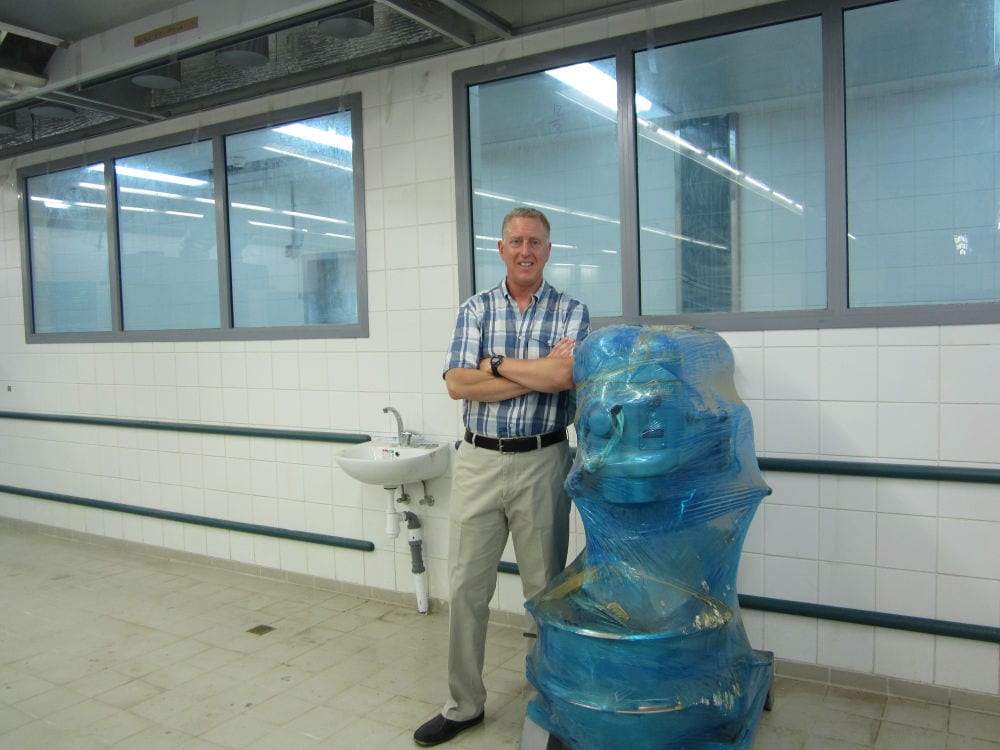 The largest institutional kitchen in the Middle East will soon open, readying itself to produce 30,000 hot meals per day to feed hungry Israelis. The kitchen is the brainchild of Michael Fromm, Chairman of American Friends of Meir Panim, Israel’s leading supplier of food and social services for poverty-stricken children and families.

“The plan is to have three shifts of staff working around-the-clock to ensure that everyone in Israel who needs a hot meal will get one,” explained Fromm to Breaking Israel News.

On a recent behind-the-scenes site visit to the 50,000 square foot state-of-the-art facility in Kiryat Gat, staff can be seen working diligently to put the final touches on this enormous building.

Fromm is the CEO of Fromm Electric Supply Corporation headquartered in Reading, Pennsylvania. He resides in Wyomissing, PA and New York City with his wife Susan. The couple have traveled back and forth to Israel for years to follow the progress of this project.

“This building originally was a dilapidated textile warehouse,” shared Susan with Breaking Israel News. “When we first saw it with our children, Jacob and Casey, it felt like we were walking over miles of junk. I thought, ‘What have we done?’ But, seeing it today, it’s an amazing accomplishment.”

Called The Mortimer Zuckerman & Abigail Zuckerman Israel Nutrition Center, the funding for the $12 million building construction and the $2 million worth of equipment came from the US, Canada, Great Britain, France, Belgium, Switzerland, Germany, Australia, and Israel.

However, there is more to this story. With Fromm’s business background and desire to help as many needy people as possible, he not only sought to build the facility but also to create jobs and a self-sustaining solution for feeding Israel’s hungry.

To that end, the nutritional center has formed a strategic alliance with a leading corporate caterer. The caterer will lease the institutional kitchen to serve their for-profit client base, which will neutralize the operating expenses to Meir Panim.

The facility is also expected to create over 200 new jobs for local workers in economically depressed areas. Hot meals will be produced in this one location and be trucked out to cities all over Israel day and night. Thirty percent of the hired staff will be legally disabled. Since much of the food production will be automated, the handicapped will be able to handle these positions and receive a wage.

David Roth, President of American Friends of Meir Panim, explained to Breaking Israel News, “Meir Panim partnering with a catering company guarantees the highest standards of food for our clientele. This Kiryat Gat facility is a revolutionary concept-for a non-profit to have overhead expenses covered through a joint venture affords us to honestly say to our funders that 100 percent of your donation goes to buying food for the hungry. We can also use donations to develop our summer camp programs, after school clubs and more.”

From his first exposure in 2003 to the help-with-dignity approach Meir Panim provides, Fromm gained an awareness that one-in-four Israelis live under the poverty line and one-in-three children go hungry daily.

“Hunger in Israel is often kept under wraps because people would rather think about the amazing strides the country has made in its short existence. I get that but we can’t ignore the hungry. Everyone wins in this deal,” Fromm proudly stated. “This building marks a clear turning point in our decade-long fight against hunger in Israel.”