In Israel, US Defense Secretary Says He’s “Not Going to Change Anybody’s Mind” on Iran Deal 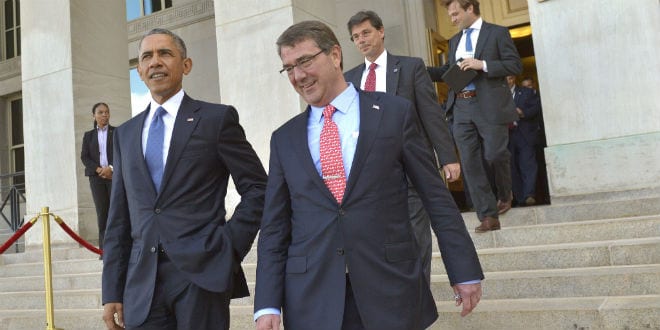 US Secretary of Defense Ash Carter said Sunday he does not have any expectations of changing Israel’s stance against the nuclear deal with Iran.

In Israel on an official visit, Carter said the main purpose of his trip was to deepen military ties between the two allied nations.

“I’m not going to change anybody’s mind in Israel. That’s not the purpose of my trip,” Carter told media while en route to Israel, Reuters reported.

Carter is scheduled to meet with Israeli Prime Minister Benjamin Netanyahu on Monday, making him the first member of US President Barack Obama’s cabinet to visit Israel following the Iran nuclear deal.

Following his visit to the Jewish State, Carter is expected to travel to Jordan and Saudi Arabia.

The secretary of defense explained that his overall message, to be delivered to Middle Eastern officials, is that the nuclear agreement is a “good deal.”

“This is a good deal,” he stated. “It removes a critical element of danger, threat and uncertainty from the region.”

“One of the reasons this deal is a good one is that it does nothing to prevent the military option – the US military option, which I’m responsible for,” he added, noting that a possible strike against Iran was still on the table.

While Carter did acknowledge the rocky relationship between Netanyahu and Obama, the secretary reaffirmed his country’s commitment to Israel’s defense, adding that “friends can disagree but we have decades of rock-solid cooperation with Israel.”

The secretary’s trip comes amid rumors that the US is considering giving Israel and other Middle Eastern allies extensive military aid packages in the wake of the nuclear deal. The Obama administration has reportedly offered advanced technology and weaponry to improve Israel’s defense capabilities.

On Sunday, Netanyahu rejected the reports, saying that no amount of compensation would be able to counter a nuclear armed Iran “sworn to our destruction.”

“The deal endangers our security, our survival even, and the security of the Middle East and the world,” the prime minister said during an interview with ABC’s “This Week”.

“Everybody talks about compensating Israel. If this deal is supposed to make Israel and its Arab neighbors safer, why should we need to be compensated with anything? And how can you compensate my country against a terror regime that is sworn to our destruction and going to get a path to nuclear bombs?” Netanyahu asked.

Questioning the West’s ability to monitor Iran’s nuclear activity, the prime minister said that Iran has a history of covert nuclear activity that went undetected for many years.

“I have full respect for our intelligence but it’s very thing ice. You simply can’t speak with confidence about knowing a covert path to the bomb, uninspected sites, because you simply don’t know,” he said. “Intelligence, and the best intelligence in the world, is still very thin ice.”