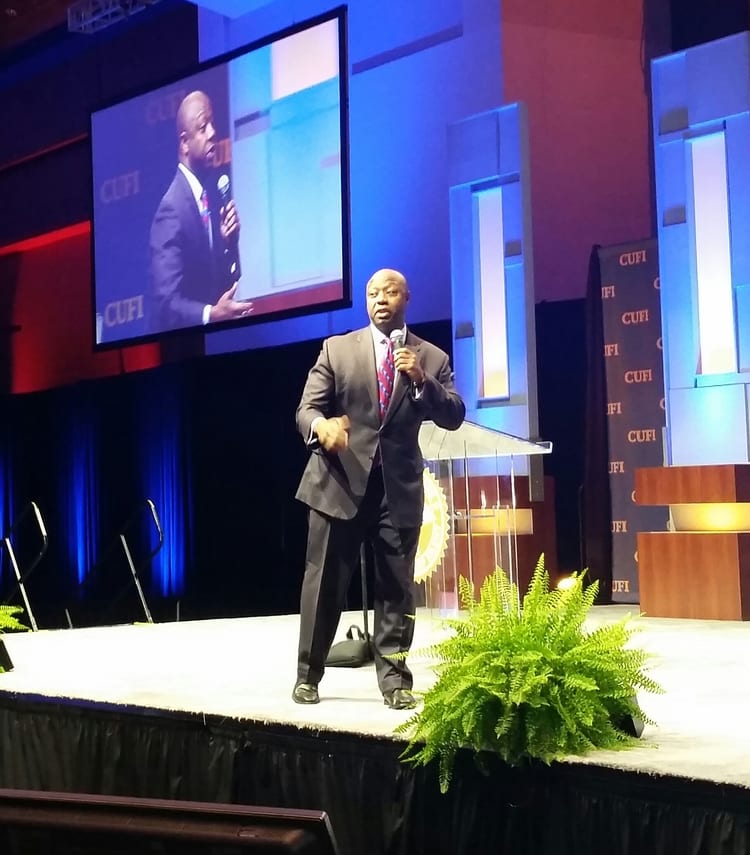 Having spent a decade growing into America’s largest pro-Israel organization, with 2.2 million members, the journey of Christians United for Israel (CUFI) arrived at a historic crossroads on Tuesday. The same could be said for the rest of America and much of the world.

Upon the announcement of a final nuclear deal between Iran and world powers, CUFI deployed thousands of Christian Zionists to lobby members of the U.S. Senate and House of Representatives to support Israel against the Iranian nuclear threat. Though the complete details of the agreement reached in Vienna were not immediately available at the time of CUFI’s Tuesday-morning program (the text of the deal was later published here), the lineup of legislative speakers struck a defiant tone.

“The magic number, the magic number of the United States Senate is 67. If we get 67 votes in the United States Senate, we can override the president’s veto,” said U.S. Sen. John Cornyn (R-Texas), referring to President Barack Obama’s expected intention to veto Congressional rejection of the nuclear deal if Congress votes to do so during its 60-day period to review the agreement.

U.S. Rep. Louie Gohmert (R-Texas) sarcastically exclaimed, “Wow! Who would’ve ever dreamed that we would work out a deal with Iran! How exciting!” Commenting on the nuclear deal’s reported intent to dismantle Iranian centrifuges, he said, “Well c’mon y’all, some of them are old, they need to be replaced.”

Gohmert called it a “betrayal of Israel’s existence” not to include the Jewish state in nuclear talks with Iran. Similarly, Cornyn said, “The result [of the nuclear talks] is that our strongest ally in the region has been unaware of the status of critical negotiations with a rogue regime that continues to make violent threats against Israel’s right to even exist.”

The latest threats came last Friday, when millions of Iranians in “Al-Quds Day” rallies across their country called for “death to Israel”—in addition to “death to America”—as they burned flags and effigies of Obama and Israeli Prime Minister Benjamin Netanyahu. U.S. Sen. Tom Cotton (R-Ark.) said at the CUFI summit Tuesday, “If you think that Iran has changed its colors, all you have to do is look back at this past Friday.”

Cotton said that while there will be much debate in Congress and the general public about the nuclear deal, the most important questions “are simple ones.” Chief among them, according to Cotton: Does the agreement dismantle Iran’s nuclear program, or not?

“It’s easy to say that there’s no trust between our two countries (the U.S. and Iran), but without that mechanism for verification, then any potential agreement really becomes a joke,” Gabbard said, adding that sanctions relief “must be tied to Iran’s compliance to the deal.”

U.S. Rep. Trent Franks (R-Ariz.) said that while conferences like CUFI’s gathering often focus on how critical U.S. support is for Israel, the nuclear deal shows how “sometimes we fail to realize how desperately important Israel is to America.” If Iran obtains nuclear weapons, “any concept of peace we have ever hoped for will be unspeakably changed,” said Franks.

“It now appears that part of Barack Obama’s shameful legacy will be Iran’s eventual nuclear weapons capability,” he said, adding that the nuclear deal mandates that Netanyahu now be “the leading voice for freedom in the world.”

U.S. Sen. Tim Scott (R-S.C.) said regarding the initial statements emanating from the parties that negotiated the deal with Iran, “Every word spoken this morning was crafted, and tested, and then spoken.”

“It is hard to make a good deal with a bad country,” he said. “That’s just the truth.”

Scott lamented that Tuesday brought no news on the release of American hostages held in Iran.

“We’ve got people stuck in Iran that need to come home!” he declared, garnering thunderous applause from the CUFI crowd.

A day earlier, before the deal was reached, Pastor John Hagee—CUFI’s founder and national chairman—said at the start of the organization’s 10th Washington Summit, “The mantra of this 10th CUFI anniversary is to compel the members of the U.S. Congress, when you have the chance to vote on this deal, vote it down. Stop the bomb. Do not let it happen.”

“Isn’t it remarkable that God brings us to DC at just the appointed time to make the difference?” said Diana Hagee, the pastor’s wife. “All we have to do is be obedient and stand where God stands.”

CUFI Executive Director David Brog said, “We knew this day would come. We knew this fight would come.” The best-case scenario of a nuclear deal with Iran, said Brog, is the release of billions of dollars into Iranian bank accounts to fund Hamas, Hezbollah, and other terrorism around the world.

“We may well be on the cusp of the worst diplomatic error ever of our generation,” he said. “And when errors of this scale are made, people pay, and pay with blood.”

Iranian President Hassan Rouhani said Tuesday that “all sanctions will be lifted” in the nuclear deal, according to Press TV.

“This is a pitiful chapter in Western diplomacy that I think will rank right up with poor Mr. [Neville] Chamberlain stopping at the top of the stairs at that plane and waiving a sheet of paper, and thinking that somehow ink on paper would stop the ravenous appetite of a madman like Hitler,” Gary Bauer—the head of CUFI’s new Washington, DC office (called the “CUFI Action Fund”) and an official in former U.S. president Ronald Reagan’s administration—told a small group of reporters at the summit before the deal was announced. “We’re facing the same kind of hatred, the same kind of ideology that is not only anti-Israel, it’s anti-Semitic, and the idea that the mullahs of Iran would sign anything that the West could rely on is I think outlandish.”