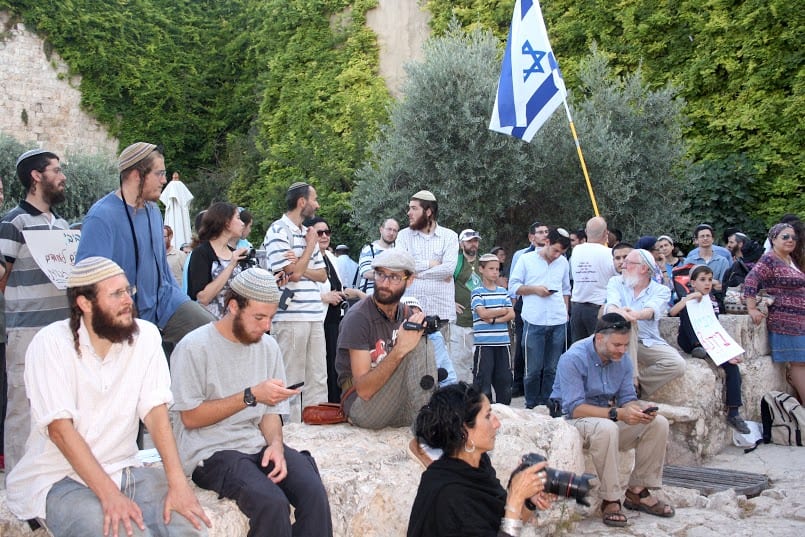 Tuesday evening, Temple Mount Heritage Foundation founder and activist Rabbi Yehudah Glick led a demonstration at the Dung Gate in the Old City of Jerusalem protesting the recent closures of the Temple Mount to non-Muslims during the Ramadan holiday.

The Temple Mount Heritage Foundation, along with several other groups and organizations working to increase access on the Temple Mount, decided to hold a peaceful demonstration to protest the most recent closure of the Temple Mount, which will be lifted when Ramadan ends on July 17.

The Temple Mount, which is Judaism’s most holy site, is open year-round to Muslims without restrictions while non-Muslims are only allowed on the Mount during limited visiting times. However, even those limited hours were curtailed when the Israeli police made the decision last week to close the Temple Mount to non-Muslims for the remainder of the month of Ramadan for security reasons.

The decision was made following several incidents of Muslims harassing Jewish visitors to the Temple Mount. Ramadan is known as a time of increased violence across Israel, and this year was no exception.

After several terrorist attacks across the country couples with a rise in unrest on the Temple Mount, including Muslims following, shouting at and threatening Jewish visitors, the police decided to shut down the source of the disturbance – Jewish prayer.

Despite the peaceful nature of the rally, the Israeli police made several attempts to stop it from happening, first seeking to ban it entirely. However, attorneys for Temple Mount rights groups successfully appealed to the Israeli High Court, which ruled that the police could not stop the protesters from expressing themselves.

The police then insisted on changing the location of the protest, which had been set to take place outside the Mercy Gate, the traditional entrance of non-Muslim visitors to the site. The court agreed to the police’s request, authorizing the protest only at the entrance to the Dung Gate, which is generally used by Jews to enter the area of the Western Wall.

The time of the rally was also changed, and its length limited to 75 minutes, during a period when Muslims are generally not at prayer.

Several religious and political leaders were present at the event Tuesday evening, including Zephaniah Drori Rav, the rabbi of Kiryat Shmona, and Knesset member Oren Hazan. The protest was attended by several hundred supporters carrying signs and banners.

Speaking at the protest, Glick said that the closure of the site was capitulation to terrorism. “We see this as an escalation, because in the past Ramadans they would close it for three days,” he said. “Now this year they’re closing it for three weeks, and the situation on the Temple Mount is becoming unbearable because every single Jew who goes up the Temple Mount becomes a victim of harassment and violence and we have to put a stop to this.”

He explained that it was also a human rights issue. “We’re here calling out for the recognition that Jews are also human beings, and we’re here to protest against the apartheid on the Temple Mount, where there is a total difference between if you are a Muslim or you are any other person,” he said.

He added a message of peace: “The Temple Mount should be a symbol of world religion and tolerance.”

The Israeli Supreme Court has upheld Jewish prayer rights at the Temple Mount numerous times, but also allows police to prevent any form of worship there if they believe such activities will incite a “disturbance to the public order.”

Since Muslims deeply object to any non-Muslim prayer on the Temple Mount, which is controlled by the Islamic Waqf, any form of public prayer among Jews, including moving their lips in silent prayer or making swaying motions, is considered “public disturbance”. Those who are caught “praying” are stopped and often escorted out by Israeli police.

This, according to Glick, is pure discrimination against Jews and other non-Muslims. Speaking to Breaking Israel News earlier in July, Glick stated: “A democratic society must never give in to violence and be determined to protect the civil rights of its civilians and visitors, otherwise the slope will be very steep and, God forbid, endless.”