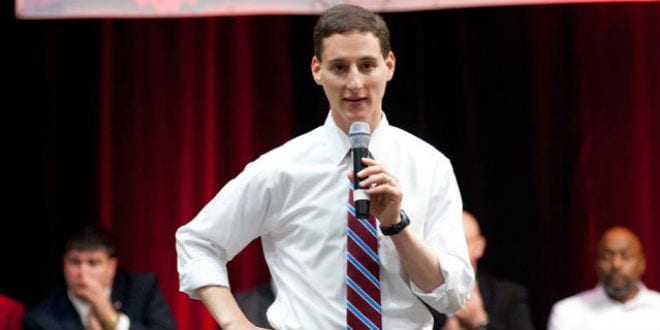 Ohio Treasurer of State Josh Mandel has made history by becoming the first state treasurer in the US to make two record-breaking purchases of Israel bonds in the last three years.

More than 80 US state and municipal pension and treasury funds have invested over $2 billion in Israel bonds, but Mandel’s 2014 purchase of $47.8 million worth is the largest single investment in Israel bonds ever made by a US government body. The previous record was broken by Mandel’s $42 million purchase in 2013.

Under Mandel’s direction, the total amount of Ohio’s investment in Israel bonds has increased to $105 million.

Mandel, a Cleveland, Ohio native and Marine Corps veteran, has held the office of State Treasurer since 2011. During his tenure, Ohio’s fiscal rank among the 50 states has risen from 43rd to 7th, in part due to Mandel’s expert handling of the state’s $4 billion government investment fund.

His decision to invest in Israel Bonds, he said, was first and foremost a good investment for Ohio’s taxpayers. Israel Bonds are viewed as increasingly solid financial investments, and they are commonly purchased by government bodies, corporations, unions, banks, foundations, and universities throughout the country.

Mandel’s other consideration in making the purchase was a desire to show support for Israel by the state of Ohio. “Today, as anti-Israel activists on college campuses call for the divestment from Israel, it seems that the investment of Israel Bonds can stand as an opposing force to the unfortunate and misguided BDS movement,” he told Breaking Israel News.

“The message to those who side with radical Islamist groups is clear. Not only do I reject their call for divestment from Israel, I proudly stand by the millions of dollars Democratic and Republican treasures have invested over the past decade. Not only is it a smart investment, but it sends a message to US policymakers that Israel is stalwart in the Middle East.”

Mandel pointed out that Israel is the only country in the Middle East that values the freedoms of speech and religion that Americans hold dear.

He also expressed appreciation for the role that Christian supporters of Israel have played in the effort to increase awareness of Israel’s legitimacy.

“A lot of Christian friends are strong supporters of Israel. In my experience, support for Israel has been a bipartisan issue and backed by Christians and Jews alike,” he explained to Breaking Israel News. “I find that oftentimes Christians have much more clarity than Jews when it comes to recognizing that the Jewish people have a Biblical right to the Land of Israel. Some of the strongest Zionist activists I know are Christian.”

Recently, Mandel has received flak for not returning a small campaign donation from Earl Holt, the president of the Council of Conservative Citizens. In the wake of Dylann Roof’s horrific killing of nine worshipers in an historically black church in South Carolina, many are scrambling to disassociate from Holt’s group, which some believe may have inspired Roof to commit the shooting.

Roof, however, is not known to have any ties to Holt’s group. The $1,500 donation was given to Mandel’s 2012 Senate campaign, and was spent on Mandel’s efforts to defeat incumbent Sherrod Brown.

Mandel, a meticulous bookkeeper, believed that it was a matter of keeping his donations and expenditure transparent. Holt’s donation had been spent early in the campaign, and the remaining funds had all come from other donors.

“Treasurer Mandel and our entire team deplore racism and bigotry of any kind,” Mandel’s spokesman, Chris Berry, told the Northeast Ohio Media Group. “The money [Holt] donated was spent over two-and-a-half years ago, so it cannot be returned.”

However, Mandel’s record of Israel advocacy clearly shows his commitment to justice and traditional values. His investment in the future of the Jewish State is not only a good financial move for his constituents but a vote of confidence for Israel as well.