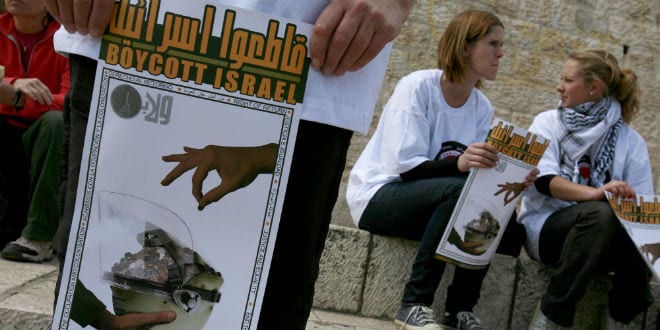 A report by Israel’s Finance Ministry reveals Israel could suffer significant financial losses if a boycott, endorsed by the Boycott, Divestment and Sanctions (BDS) movement is widely adopted, The Times of Israel reported. The ministry report was prepared in 2013 but only made public this week.

According to the report, the damage from an international boycott could range from approximately half a billion shekels ($130 million) per year and up to 500 people losing their jobs, to NIS 40 billion and 36,500 firings, depending on how widely implemented such a boycott becomes.

Similarly, a report issued by the Rand Corporation last month indicated a loss of $9 billion annually and up to $50 billion over ten years if a peace deal with the Palestinians is not reached.

The Finance Ministry report was initially withheld from the public to avoid strategic harm to Israel’s economy. However, after a two-year battle with Israeli NGO the Movement for Freedom of Information, the ministry finally agreed to release its findings.

The information goes public at a time when government officials are expressing growing concern over the swelling influence of the BDS movement. Ministers have vowed to combat BDS efforts via legislative and legal means.

Moderate expansion of the boycott movement resulting in voluntary boycotts by European countries or retail chains of goods produced in Judea and Samaria could cause a loss of roughly half a billion shekels per year and cost about 430 people their jobs. A more wide-ranging and restrictive boycott by all EU states of such goods could impact production within the so-called Green Line as well, leading to a NIS 2 billion loss and and 1,800 lost jobs.

The most extreme scenario projected in the report was a full boycott of all Israeli products by the EU, including a halt to foreign investments in Israel. These sanctions, similar to those imposed on Apartheid South Africa, would result in 36,500 jobless Israelis and NIS 40 billion in lost revenue annually.

The report took a rocky path to publication. Initially told by the Jerusalem District Court to publish the report but redact sensitive passages, the state was then asked twice to delay publication. Finally, the report was released uncensored last week.