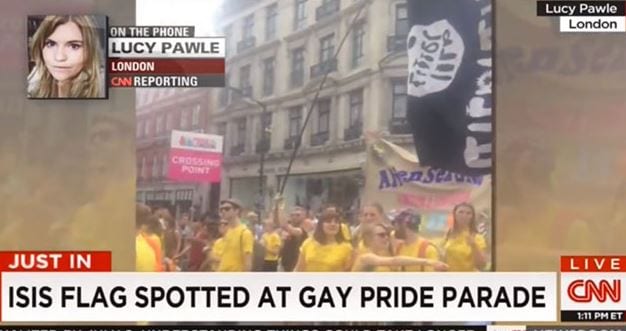 In the past weeks there has been a worrying uptick in the number of incidents involving the latest chilling hate symbol – the ISIS flag.

ISIS, or the Islamic State, is a jihadi militant extremist group which is overtaking large swaths of the Middle East at a frightening pace, spreading terror, violence and death through its controlled territories in Iraq and Syria. The terror group’s goal is to create a worldwide Islamic caliphate, destroying everyone it considers infidels.

Its flag, known as the “Black Standard”, has quickly become recognizable throughout the world as a symbol of hate and intolerance. The notorious flag features a black background with white Arabic writing that translates to,“There is no god but God; Muhammad is the messenger of God.”

Lately, the ISIS flag has been appearing in unlikely places.

At the London Pride Parade in June, a CNN reporter saw a man waving what she believed to be the ISIS flag, and she reported it as such. In what became an embarrassing gaffe for the news network, the “ISIS” flag was revealed to be a parody created by artist Paul Coombs, who decorated his version of the flag with images of sex toys in an effort to subvert ISIS’s message of intolerance. Coombs carried the flag for 1.5 miles of the parade, until police officers, concerned that people might take the flag to be authentic, asked him to lower it.

Just a few days earlier, the ISIS flag showed up on a cake in Louisiana. Sensitivities to culturally offensive symbols have been high since the horrific June 17 killing of nine parishioners in an historically black church in Charleston, South Carolina. Many of the nation’s largest retailers, including Amazon, Walmart, and eBay, announced they would no longer sell images of the Confederate flag, which the killer posed with in photos before the attack.

But the banning of one image led to the questioning of why other, equally reprehensible images remained fair game for retailers.

After Walmart refused Chuck Netzhammer’s request for a cake with an image of the Confederate flag printed on it, with a banner reading “Heritage, Not Hate”, Netzhammer returned with a different image: the ISIS battle flag. This time, Walmart made the cake.

In a video posted to YouTube addressing Walmart, Netzhammer said, “ISIS happens to be somebody we are fighting against right now, who are killing our men and boys overseas, and beheading Christians…Walmart, can you please explain why you are alienating Southern Americans with this trash you allow to be sold in your stores?”

Amazon also had some explaining to do when, after announcing their decision to stop selling the Confederate flag, several items of equally questionable moral content were discovered for sale on their site. A rumor began to circulate on social media that Amazon was selling ISIS flags, accompanied with a screenshot of the item, priced at $19.99. A Google-cached page, no longer available, showed that the item had been sold as recently as early June, though it had afterwards been taken down.

However, flags of other terrorist groups, like Hamas, can still be bought on Amazon, as well as Nazi paraphernalia like SS flags and even phone cases decorated with swastikas.

On Saturday, the ISIS flag surfaced again in the main streets of London. A man and his daughter, both carrying the flags, paraded past the Houses of Parliament. The man was draped in a full-sized version of the flag, while his daughter, riding on his shoulders, waved a smaller version.

According to the Mail Online, the man was stopped by police, but ultimately allowed to continue displaying the flag because he was not breaking any laws, though many people disagreed with this decision, comparing the ISIS flag to a swastika symbol.

Most troubling of all these appearances, however, was the recent report of an ISIS flag being flown on the Temple Mount, which is Judaism’s holiest site. Photos posted on social media show a masked man holding the flag in front of the Dome of the Rock, symbolizing the presence of ISIS in Jerusalem.

“The Temple Mount should not be a place for demonstrating, and definitely not ISIS. I do hope that the authorities and police make sure it doesn’t happen again,” Rabbi Yehudah Glick, head of the Temple Mount Heritage Foundation, told Breaking Israel News.

Some of these flags are meant in earnest, to convey support of ISIS. Others are being used to make a point: that though ISIS is quickly becoming one of the most dangerous and threatening terrorist organizations of our times, no one seems to recognize the extent of the danger. Instead, the symbol is permitted to spread, to proclaim itself freely, to go unchecked and unchallenged – much like ISIS itself.

Last fall, a student at Berkeley conducted an experiment with the flag. He stood on campus waving an ISIS flag shouting pro-ISIS sentiments. Startlingly, he encountered little more than passing glances from his fellow students. One even wished him good luck. Several agreed with his pro-ISIS, anti-American sayings.

When he waved an Israeli flag for contrast, he was cursed and yelled at, told that “Hamas is the greatest” and that Israel is “killing kids”.

These are not random, unrelated events. ISIS is a serious threat, not a passing fad. When the ISIS flag appears, it is a sign that ISIS, and the fear, hatred, violence, and ignorance it brings, is not far behind.