Jewish and Want to Pray on the Temple Mount? Israeli Police Say Never 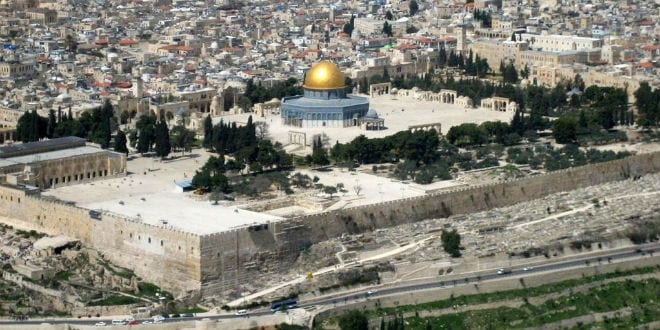 Recently a youth group by the name of Students for the Temple Mount prepared a special report about the sad state in which the Temple Mount in Jerusalem is being run by the current administration.

The comprehensive report is comprised of accumulated statistical data regarding instances of incitement and other injustices that have taken place on the Temple Mount over the past few months committed both by the Israeli Police, who control entry onto the complex, and the Muslim Waqf, the administrators of the Temple Mount.

The report was initially to have been presented to the Committee of the Interior and Environmental Issues. However, following heavy handed pressure by Arab members of the Knesset and the capitulation of the head of the committee to that pressure, the discussion surrounding the report was preemptively cancelled and the report was refused.

Students for the Temple Mount have instead published the report online where it is now easily accessible to all.

The report, published in Hebrew, details on a day by day basis over the course of four months Jewish access to the Temple Mount. The report tracks holidays and days Jews were allowed to ascend the Mount, instances of Waqf interference, how many hours were trimmed off of time that Jews were allowed onto the Mount, the number and types of infractions committed by the Police against Jewish visitors, and how many Jewish visitors were outright refused entry even though they complied with all of the necessary pre-existing conditions imposed upon Jewish visitors.

Among other accusations leveled at the Israeli Police by the authors of the report are a laxity of checking Muslim worshipers who enter the holy site and an overly thorough and invasive security check of the Jewish worshipers.

The report also depicts how the Israeli Police and Waqf officials do little or nothing to prevent the waving of flags and signs as well as chanting of slogans of enemies of the State of Israel as well as terror organizations on the Mount.

Soccer games, which are illegal, have become accepted practice on the Temple Mount and are not disbanded or prevented by security forces. The report also documents cases of female Muslim worshipers being sexually harassed on the Mount.

The report lists numerous instances in which police have failed to prevent outright attacks on Jewish worshippers, allowed inflammatory remarks and actions against Jews, and lost control of the situation on the Temple Mount completely while trying to kowtow to the Muslims.

Students for the Temple Mount illustrate how the Police have wantonly flouted the Israeli legal system, taking the law into their own hands and overruling de-facto the laws that the Supreme Court of Israel as well as other local courts have set up to protect the rights of Jewish worshippers on the Temple Mount.

The claim usually made by the Police to forbid Jews from ascending the Mount is that Jewish individuals, including many under-age youth, have been guilty of “disturbing the peace” and thus justify their removal from the area as well as their arrests and laying charges to Jewish worshippers who visit and or frequent the site.

One such instance were the charges laid against Rabbi Yehuda Glick earlier this year in which he was exonerated. Glick, who has been at outspoken proponent of non-Muslim rights to visit and pray on the Temple Mount, survived a terrorist assassination attempt in October 2014 for his work on the Temple Mount.

In March, a Jerusalem Judge ruled that people of all faiths, including Jews, must be allowed to pray at the Temple Mount. This ruling has been outright ignored by the Israeli Police.

A Knesset subcommittee was convened in April to discuss the issues surrounding the Temple Mount and Jewish worship at the site, but as of yet no changes have occurred on the ground.

There has been no response as of yet by the Israeli Police to the report.