CNN: Dome of the Rock Top Site on “Verge of Extinction”

Home » CNN: Dome of the Rock Top Site on “Verge of Extinction” 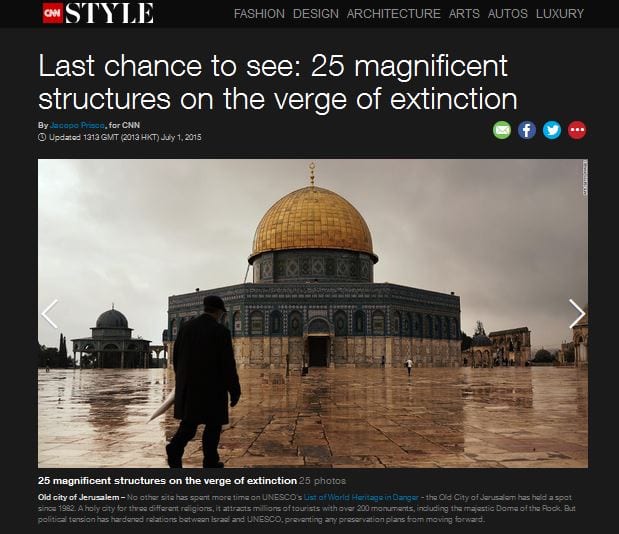 CNN released a list of what it called “25 magnificent structures on the verge of extinction” last week, and the Old City of Jerusalem took top spot. The news network cited “political tension” as the primary reason the site was in danger.

The Old City, along with its walls, has claimed the top spot on UNESCO’s “List of World Heritage in Danger” sites since 1982, when it was proposed by Jordan. The Old City claims the title of the longest any site has been on the list. CNN noted the listing, singling out the Dome of the Rock among some 200 monuments across the city which attract millions of visitors annually.

The eastern part of Jerusalem, including the Old City, came under Jordanian rule in 1948, during Israel’s War of Independence. In 1967, during the Six Day War, the city was reunified and annexed by Israel, a move that to this day has not been recognized internationally. Since then, the city has been a hotbed of tension.

In an effort to maintain stability, following the reunification, the Israeli government opted to turn over control of the Temple Mount, Judaism’s holiest site and one-time home of the First and Second Temples, to the Muslim Waqf, based in Jordan.

Despite numerous court rulings to the contrary, security forces prevent non-Muslims from praying there or performing anything resembling a religious ritual. Access to the site by non-Muslims is also severely restricted. Last week, social media reported sighting an Islamic State flag flying there.

While acknowledging the Old City is “[a] holy city for three different religions”, CNN failed to identify which religions, making no mention of the Dome’s location atop the Temple Mount.

The UNESCO listing likewise calls Jerusalem “a holy city for Judaism, Christianity and Islam”, then states that the Dome of the Rock “stands out: built in the 7th century, it is decorated with beautiful geometric and floral motifs. It is recognized by all three religions as the site of Abraham’s sacrifice.”

The Wailing (Western) Wall, a remnant of the Second Temple and currently the holiest accessible prayer site for Jews, is identified by UNESCO only as “delimit[ing] the quarters of the different religious communities”.

According to CNN, “political tension has hardened relations with Israel and UNESCO, preventing any preservation plans for moving forward.” This statement fails to acknowledge, however, the passage in 1967 of the Preservation of the Holy Places Law, a law which protects religious sites and guarantees access to them by adherents, more than was done during the 19 years Jerusalem was under Jordanian rule.

Today, the Temple Mount may indeed be in danger, but not necessarily for the reasons cited by UNESCO or CNN. Repeated excavations of the site by the Waqf, without authorization or proper preservation methods, have undermined its stability. The Waqf also stands accused of trying to destroy evidence of a Jewish historical connection to the site.