Israel’s President: “Month of Ramadan a Month of Terror”

Home » Israel’s President: “Month of Ramadan a Month of Terror” 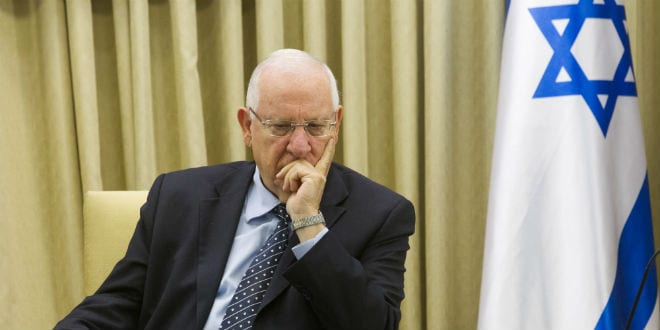 The month-long Ramadan holiday, which began on the evening of June 17, sees a general uptick in violence and terror related incidents across Israel. Most attacks occur in Jerusalem, Judea and Samaria.

“This month of Ramadan is turning into a month of terror before our very eyes,” Rivlin said, vowing that Israel will continue to combat terrorism. “Terror is terror is terror, wherever it strikes in the land of Israel, and across the world.”

The president angrily called out Palestinian leadership for caving into Hamas and not condemning each terror attack since the start of Ramadan. “The silence is louder than ever,” he stated.

Despite continued acts of terror, Rivlin made clear that Israeli will not give up its territory and will continue to live in the Land of Israel. “For both of us [Israelis and Palestinians] there is no choice but to live together,” he said, emphasizing the need to direct peace negotiations.

“The Jewish people will continue to live in the land of Israel without being forced to fear for their lives. I pray for the recovery of the injured and trust the security services will bring those responsible to justice.”

The president praised the Israeli defense establishment and expressed his confidence in its ability to safeguard the country and its citizens. Rivlin urged Gentiloni to use his influence with the Palestinians to encourage renewed peace talk to help resolve the Israeli-Palestinian conflict.

The Italian Foreign Minister thanked Rivlin for his warm welcome and condemned the spate of recent terror attacks across the country.

“We strongly condemn the terrorist acts, and express solidarity with the families and people of Israel. We always condemn such acts, but especially now in the month of Ramadan which should be a time of respect and understanding,” he said.