Why Non-Jews are Asking a Mohel to Circumcise Their Sons 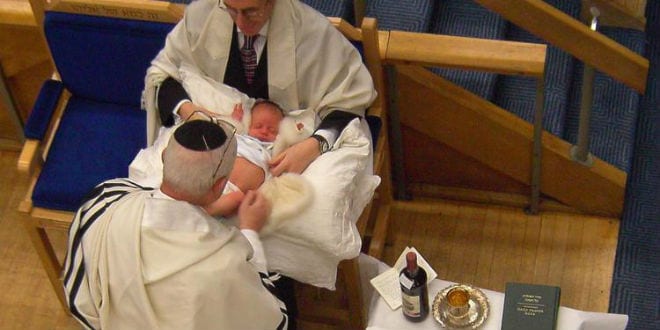 An interesting phenomenon may be emerging in the U.S. when it comes to brit milah, the Jewish circumcision ritual. A new report by The Atlantic has concluded, based on interviews with a number of mohels, that a growing number of non-Jewish couples are choosing to circumcise their sons in the traditional Jewish way.

“Nationwide, circumcisions have decreased over the last few decades—from 64.5 percent of newborn boys in 1979 to 58.3 percent in 2010, according to Centers for Disease Control data—but among those opting to circumcise their sons, some non-Jews are forgoing the hospital or doctor’s office and requesting Jewish mohels for reasons both practical and religious,” writes Jessica Alpert.

Some mohels are willingly catering to non-Jews. For instance Philip Sherman, a mohel and a cantor at New York synagogue Congregation Shearith Israel, says he now conducts about one or two circumcisions on babies of non-Jewish couples. While in those cases he does not perform the Jewish blessing usually bestowed during a Jewish brit milah, he still includes a spiritual element into the procedure, often allowing the families to add their own readings, music, and prayers.

Sherman says non-Jewish couples are attracted to the spirituality of a circumcision conducted by a mohel, which has led him to set up a website dedicated only to “holistic circumcisions” for non-Jews.

Families “are seeking the spiritual component and are often seeking to do this in the context of their own religion or spirituality,” he says.

But this trend could mean a problem for those mohels who are not also physicians.

“The right to perform brit milah is protected under the First Amendment, but when it’s no longer a religious ritual, mohels may run up against laws that forbid the practice of medicine without a license,” explains Marci Hamilton, a church-state scholar and professor at the Cardozo School of Law at Yeshiva University. “There is no legal gray area for mohels who are also health professionals—these mohels can perform the procedure on non-Jews as part of their medical practice, even if the primary purpose is religious rather than medical,” explains the article in The Atlantic.

Since there have been some areas around the country where the idea of banning circumcision altogether has gained traction, as has been the case in California, some Jewish religious figures fear that if a non-doctor mohel makes a mistake on a non-Jewish child, it could foster greater opposition to the practice.

“I think it is problematic on every single level for mohels who are not doctors to do procedures on non-Jews. I am dreading the day when one of these guys makes a mistake and all of Judaism pays for it,” said Michael Barclay, the chief rabbi at Temple Ner Simcha, a synagogue in Westlake Village, Calif., who is not a mohel himself.

But despite this fear, as well as some opposition on the part of some members of the Jewish community to the idea of performing a Jewish religious ceremony for non-Jews, Sherman says that giving the brit milah option to non-Jews serves “to let people know that there is an alternative that is better, more compassionate, gentler than what doctors or hospitals will do.”