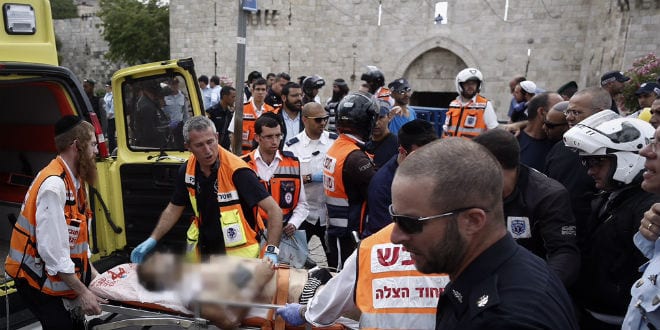 An Israeli Border police soldier came under attack Sunday morning while on duty at the Damascus Gate in Jerusalem’s Old City.

A Palestinian terrorist stabbed the soldier in the neck before being shot by the soldier despite his serious injuries, Israeli police said. After shooting the terrorist, the soldier collapsed.

URGENT: Prayers needed for Raz ben Carmella, the Policeman who was stabbed by terrorist, and is in critical condition pic.twitter.com/ae1Q9yt1bO — Israel News Feed (@IsraelHatzolah) June 21, 2015

Magen David Adom paramedics responded to the scene of the attack and performed emergency first aid, including CPR, on the soldier.

Jerusalem Mayor Nir Barkat condemned the attack and praised the swift reaction of the injured soldier. “I want to commend the action of a border policeman, who while injured kept cool and neutralized the terrorist, and thus saved lives and prevented further injuries,” he said.

“We all pray for his recovery, and we must persist and continue in our normal routines,” Barkat added.

Sunday morning’s attack comes two days after 25-year-old Danny Gonen was shot and killed by a Palestinian near the Binyamin region of Judea and Samaria on Friday.

Gonen was shot several times in his upper body at close range by a Palestinian who flagged him and his friend down for help.

The shooter is still at large.