Toronto Family Gives Back to Israelis in Need with Meir Panim 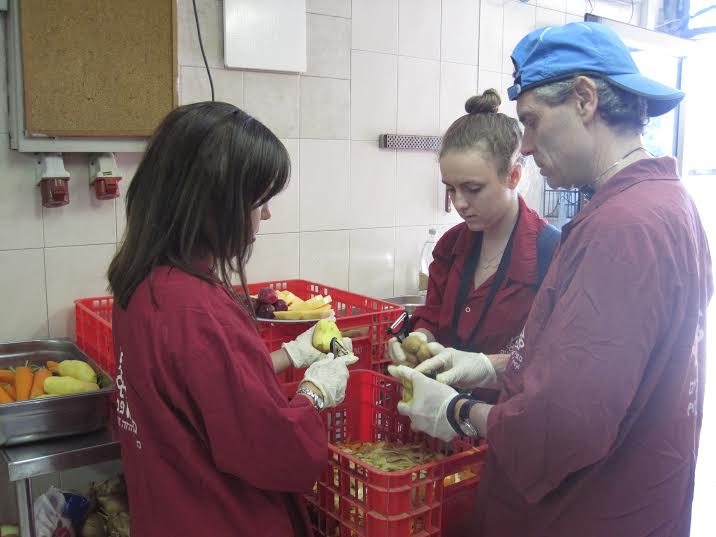 On Thursday, a family of six from Toronto donated their morning to volunteering for Meir Panim’s “restaurant-style” soup kitchen serving hundreds of Israel’s poor daily in Jerusalem.

The Benattars were in Israel on a nine-day trip celebrating their son Josh’s Bar Mitzvah and wanted to use the opportunity to give back. “Whenever we travel, we like to do something within the community to help,” Josh’s mother Brenda told Breaking Israel News as the family peeled carrots and potatoes in the Meir Panim kitchen.

Before their trip, the family contacted the Jewish National Fund to find out how they could contribute in Israel and were connected with Meir Panim, which welcomes small groups of visitors at their Jerusalem branch.

“In the summer, we have many volunteers from abroad,” said Yisroel Kohn, a Meir Panim manager. “Sometimes as many as four groups a week.” At the Jerusalem branch, Meir Panim can accommodate up to 10 volunteers while at their larger branches, they have the ability to welcome groups of up to 40.

“We view it as a positive thing,” explained Kohn. “When people come to volunteer they get exposure to what we do first-hand, rather than through a website or an email.”

The Benattar family consists of Simon and Brenda and their three children – Abby, Jordy and Josh. Simon’s sister Judith also joined the family on their trip. “It’s been amazing,” said Simon, a real-estate investor. “We love Israel. But there’s lots of poverty here, and it’s sad,” he told Breaking Israel News.

The Benattars have a long-standing tradition of giving back to the communities they visit. “We went on a family trip to Africa and we spent a morning visiting an orphanage full of kids whose mothers had died of AIDS. We were able to spend time with the orphans,” said Brenda. “In Cambodia, we visited a children’s hospital and brought them all kinds of toys.”

But it’s not just when they’re away from home that the family volunteers to help the needy. For the last six years, they have been involved with an organization called Out of the Cold, which feeds and shelters Toronto’s homeless community during the winter months. Dad Simon and son Josh volunteer there together once a week.

“The homeless people ask for Josh,” his mother said. “They all know him and recognize him. They like him because he always gives them more than he’s supposed to.”

Josh admitted to it with a shy smile.

The six, wearing Meir Panim’s red uniforms, plus their Israeli tour guide, enthusiastically peeled vegetables for about an hour before the lunch meal began. They chatted with other volunteers, asking them questions about the organization and poverty in Israel.

Every Thursday, Meir Panim sets out boxes of vegetables for the benefit of their patrons, who come with bags and carts and gather the food before lunch. “They collect it for Shabbat,” explained Kohn.

The Benattars also got a chance to interact with some of the diners. Before lunch, they spoke with Stella, a long-time visitor to the Meir Panim restaurant. She has been coming almost every day for six years. “The food is very good,” she said.

The restaurant workers know Stella and her food preferences well. Though the day’s menu included a beef main dish, they served Stella a special tray with chicken instead because she only likes drumsticks.

The Meir Panim restaurant strives to provide individual service for each of their patrons, setting aside food for those who don’t come to regular meals or for people who prefer certain dishes. “Some people only come once a week, and we give them food for the whole week,” said Kohn.

Meir Panim is also  mindful of holidays and special occasions. Thursday was Rosh Chodesh, the first day of the month of Tammuz in the Jewish calendar. To celebrate, the restaurant distributed slices of melon with lunch. “We saved it for today,” explained Kohn with a smile.

When lunch began, the Benattars immediately set to work serving food. The Meir Panim “restaurant-style” program means that the patrons come in, look at the daily menu and sit down at tables. Volunteers bring them trays loaded with a balanced meal. Some of the food is donated from hotels, and some of it is cooked at the restaurant by other volunteers.

The Benattar kids were clearly comfortable helping out. Josh bustled back and forth carrying trays, and Jordy took requests, delivering salt, fruit and cups of water to the tables. “B’teavon,” they told the diners, Hebrew for “bon appetit.”

In the three days they spent in Israel before coming to Jerusalem, the Benattars traveled all over Israel, including visiting the Galilee, made candy at a chocolate factory, visited a Druze village and checked out a vineyard.

“It’s been really good, and also really tiring,” said Abby, 19, with a smile. Her older sister Jordyn, 21, recently graduated from Queen’s University. Luckily, the family is able to travel together about once a year.

Every time they do, they will continue giving back. “It’s always great. Giving is always much better than getting,” Brenda told Breaking Israel News after the family helped serve lunch. Simon agreed. “It’s wonderful. It feels good to help people out.”

“It was fun,” said Josh, the Bar Mitzvah boy. “It was interesting.”

Volunteering during a family vacation is a fantastic way to get involved with the community from a perspective you might not otherwise see. In addition to experiencing Israel’s amazing tourist spots, the Benattars got a chance to make a difference for Israelis in need and add a special meaning to their trip.