Rabbi Receives Heavenly Message in the Cave of Elijah the Prophet 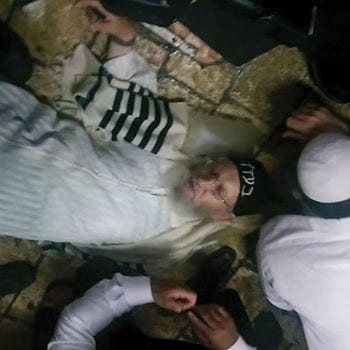 On the morning of Tuesday, June 9, Israeli mystic Rabbi Amram Vaknin, led a prayer service at the Cave of Elijah the Prophet in Haifa, Israel, along with approximately 30 Jewish men and 30 Jewish women, to pray for the welfare of the Jewish people.

Gil Nachman, an aide to the Rabbi and an eyewitness, told Breaking Israel News that at approximately 11:30 AM, Rabbi Amram Vaknin suddenly fell to the ground, into the mud and water on the floor of the cave.

In this world, Rabbi Vaknin was lying on the floor, but what happened in that cave, according to Nachman, “was above this world. The rabbi received a message for the Jewish people from Eliyahu haNavi (Elijah the Prophet) that there is a decree from Heaven that war will be starting in the south of Israel, will move to the north of Israel and will continue inside of Israel. Thousands of people will die, God-forbid.”

All Jewish people throughout the world are being urgently requested to unite, to pray together in groups, to fast and to give charity in order to avert this decree. Jews are being urged to direct the power of their prayer to beg God to have mercy on the Jewish nation.

Further, according to Nachman, people are being asked to polish their character traits, their fear of Heaven and to improve their interpersonal interactions, in order to change the decree in Heaven.

In an interview with Breaking Israel News, Nachman, speaking for Rabbi Vaknin, passionately appealed to the Jewish people to unite. “We have to be together! No matter what a person wears on the outside, we have to have the intention to love one another.”

Yehudis Schamroth of Beit Shemesh, Israel began attending Rabbi Vaknin’s prayer gatherings six months ago. She told Breaking Israel News, “I first went to Rabbi Vaknin for brachot (blessings) for me and my family. He took a genuine interest in me in a grandfatherly way. He became especially animated in conversation when I asked him how I could help bring along the geula (the final redemption of the Jewish people).”

Rabbi Vaknin, a 76 year-old mystic who lives in striking poverty in the port city of Ashdod, comes from a family of mystics. His mother and his grandmother had the same gift of receiving revelations from Heaven.

Through these messages, Rabbi Vaknin accurately predicted the “Gaza Freedom Flotilla” in May, 2010, the deadly fire in the Carmel forest in December of 2010 as well as Operation Pillar of Defense in 2012 and Operation Protective Edge in 2014.

In the coming days, Rabbi Vaknin is expect to announce a large prayer gathering in Israel. Although a video of the revelation was posted to Facebook, it is difficult to understand. Nachman told Breaking Israel News that some Hebrew subtitles have been added..

The location where this message was received by Rabbi Vaknin is significant. The cave is the very place where God spoke to Elijah when he was hiding from King Ahab and Queen Jezebel.

Further, in Jewish tradition, it will be Elijah the Prophet who announces the ultimate redemption of the Jewish people.