Netanyahu: Even Without Nukes, Iran Remains a Threat

Home » Netanyahu: Even Without Nukes, Iran Remains a Threat 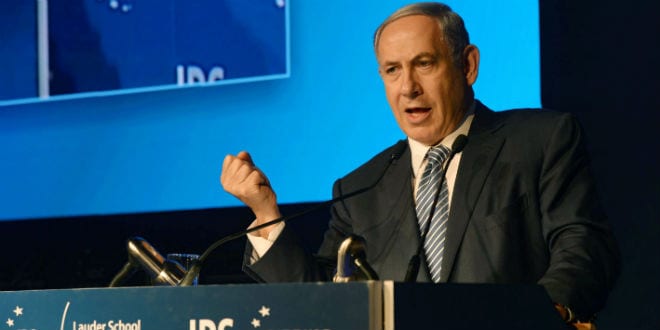 Iran is a threat to Israel and the world, even without nuclear capabilities, Israeli Prime Minister Benjamin Netanyahu warned Tuesday. Speaking at the fifteenth annual Herzliya Conference, he listed five areas in which Iran represents ongoing danger.

Ynet reported that its nuclear program remains the greatest menace, and the current framework agreement is doing little to stop it. The sanction relief offered by the agreement would provide Iran with “no less than $150 billion”.

“As soon as sanctions are removed, they will get hundreds of billions of dollars, which will bolster Iran’s aggression,” Netanyahu said.

Whether Iran breaks its commitments to the nuclear deal or not, the Islamic Republic remains a threat. “Iran insists on not having real supervision because it is being left with the infrastructure to enrich uranium” which it can use to break the deal, Netanyahu warned. However, even within the terms of the agreement, “within 10-12 years it could build an infrastructure of hundreds of centrifuges, with international approval.” These centrifuges could be as much as 25 times more effective than any they have now.

Netanyahu went on to outline four specific ways a non-nuclear Iran continues to threaten. These include the weapons the country supplies its allies, “some of which are aimed at us”; its relationship with Hezbollah, operating in both Lebanon and around the world; its cyber aggression towards Israel, the US and Saudi Arabia; and its production of advanced weaponry.

Commenting on the Islamic Republic’s weapons production, Netanyahu noted, “Their work is impressive. They take a project and finish it in record speed.”

In his address, Netanyahu also discussed the Israeli-Palestinian conflict. He charged that Palestinian Authority Chairman Mahmoud Abbas continues to refuse to negotiate.

“The Palestinians have a trick in which they refuse to talk every time, and then turn to ask for a boycott against Israel and submit demands to the UN Security Council and say we are refusing to renew talks,” he said.

“I’ve been going to talk to Abbas for six and a half years and I had to do things that were difficult for me – settlement freeze for almost a year, and on the tenth month he agreed to meet. We met for three hours in Sharm el-Sheikh and three hours in Jerusalem, and he had one demand – continue settlement freeze,” the prime minister went on to say. “I called on him to renew negotiations without preconditions.”

“He can make international moves without talking and then accuse Israel of being unwilling to talk,” Netanyahu added.

Netanyahu added that “imposing peace from the outside doesn’t work”, referring to Palestinian efforts to force a deal through international pressure. However, he expressed hope that like-minded Arab states could encourage the Palestinians to return to the negotiating table.

“There might be an opening because some of the Arab states silently agree with (my position) … (and) they might be in a position to influence the Palestinians to adopt a more conciliatory and positive approach,” he said.

Netanyahu also addressed the matter of Israel’s security needs in any final agreement. “The problem in Gaza is not arms smuggling, because there is not a lot of that – there’s self-production. They are producing pipes with accurate aiming capabilities and this is because we are not there,” he said. “This [launching rockets] doesn’t happen in Ramallah because when you need a security regime, it’s Israel’s security abilities.

“We must ensure a long-lasting and stable security regime,” Netanyahu stressed. “This is not an excuse, there are real things and that is why we need to negotiate the recognition of two national states with real security arrangements.”