Sheikh Pronounces Blood Libel During Sermon on the Temple Mount 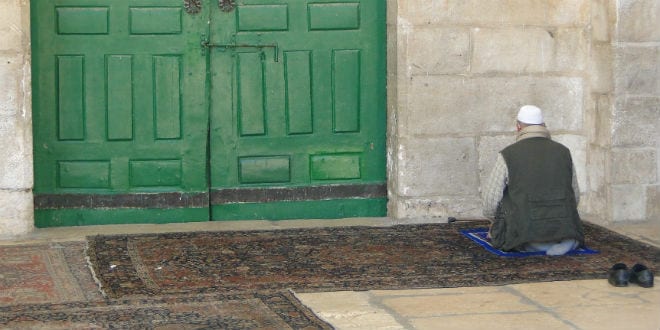 Accusations of anti-Semitism were leveled against a Muslim preacher on Wednesday, who revived Medieval blood libels against Jews in a sermon he made on the Temple Mount earlier.

The preacher, Sheikh Khaled al-Mughrabi, who teaches religious classes on the mount and is an employee of the Waqf Temple Mount oversight organization, was accused of being an anti-Semite for the comments he made to his congregants.

Palestinian Media Watch translated a lecture that had been published online, in which Mughrabi accused Jews of the age-old European anti-Semitic claim of slaughtering gentile children and draining their blood for use in Passover matzot. Mughrabi went on to say that the reason why the Nazis killed Jews in the Holocaust is that Jews use Christian blood in Matzot. The video depicts Mughrabi telling congregants that Jews were also behind the 9/11 attacks on the United States, and that they worship Satan.

The Simon Wiesenthal Center, in a letter to the press and copied to Jordanian King Abdullah and Palestinian leader Mahmoud Abbas who oversee the Waqf, called upon them to “immediately take action against Sheikh Khaled al-Mughrabi, the religious teacher at the al-Aqsa Mosque who is on the payroll of the Waqf, for using his class to promote the infamous blood libel screed that ‘explains’ why the Nazi Holocaust took place.”

The letter continued to underscore the importance of the holy site as well as decry the misuse of rhetoric spouted by Mughrabi. “The Temple Mount is a site of ultimate religious importance to Judaism and revered also by both Christianity and Islam. It should be an area that promotes peace, tolerance, and mutual understanding. However, the al-Aqsa Mosque has now been used to repeat horrific lies and legitimize genocide. Left unchallenged, the Sheik’s ‘sermon’ will only spawn more hatred and violence.”

Mughrabi gives a twice weekly lecture on Islam at the al-Aqsa mosque on the Temple Mount. In the video, he goes on to say that Jews are not monotheistic, claiming that they worship 34 gods, some of whom are stronger than Allah, and that the number 11 is a sacred number in Judaism, signifying the Devil, as is 666.

“They have smaller gods, from one to nine,‎ and they have gods who are stronger than Allah, from 11 to 34. Devil or Satan is ‎number 11 for them. If you look at history, my brothers, you’ll see that the number 11 is ‎holy for the Jews, and 666 is also a holy number, three times six signifies the Devil.‎

“Everything they wish to ‎happen, or that they want to do and succeed at, they try to make happen on the 11th of ‎the month… Therefore, notice the attacks on America [9/11] that took place. When were they? On the 11th of the month. Why? Because ‎who was behind them? … It’s known that the Jews were behind them.”

Mughrabi further delved into classical anti-Semitic rhetoric, claiming that Hollywood is run by the Jews, and that they control the freemasons.

This is not the first time that an outspoken Muslim celebrity has accused Jews in the style of classical anti-Semitic attacks recently.  As reported in the Times of Israel, in September 2014, Sheikh Abd Al-Mun’im Abu Zant, a former Jordanian MP, revived the blood libel in an interview with al-Aqsa TV. In July 2014, Palestinian Islamic Jihad spokesman Daoud Shihad said that Israeli rabbis told IDF soldiers to knead the blood of Arabs into their dough, and in May 2013, Egyptian politician Khaled Zaafrani, during an interview on al-Hafez TV, a Salafist Egyptian station, also brought up the blood libel.