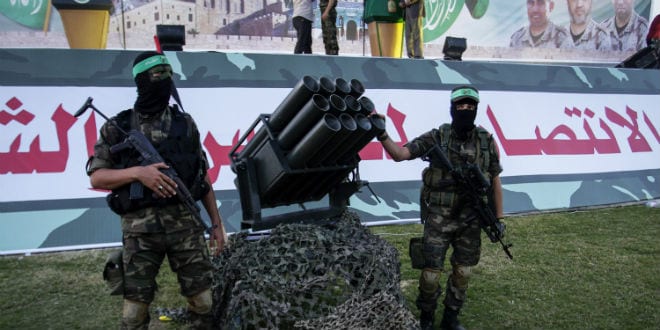 Just one hour after the Sabbath ended in Israel, Code Red sirens were heard in the country’s southern region, as a rocket fired from Gaza landed near Ashkelon Saturday night. The Israel Air Force responded with strikes on Hamas terror targets in the northern Gaza Strip early Sunday, reported Ynet.

A single rocket, fired at 9:40 Saturday night, landed in an open area near Ashkelon. No casualties or damages were reported. The IAF strike hit a Hamas training facility, where no casualties were reported, either. In addition, Defense Minister Moshe Ya’alon ordered the closure of the Kerem Shalom and Erez border crossings between Gaza and Israel, allowing only humanitarian cases through.

The ISIS-supporting Salafist group calling itself the Omar Brigades, which took responsibility for last week’s rocket fire, claimed to have fired the weekend rocket, as well. The rocket was meant as a show of solidarity with Palestinian prisoners held in Israeli jails, as well as group members held by Hamas in Gaza prisons.

“The Jews will never enjoy security and safety as long as we are alive,” the group said in a statement.

Additionally, Israel Army Radio reported, the Salafists wish to drag Israel into their conflict with Hamas, keeping the Gaza ruling party so busy it has no time to deal with them.

There will be no changes to daily routine in Ashkelon or the region in response to the latest attack, authorities announced.

Ashkelon Mayor Itamar Shimoni said following the rocket strike, “This is a moment of truth for the Israeli government,” he said. “We aren’t talking any more about a mistake or one rocket, but the blatant breaking of the cease fire.

“The peace that we thought would survive in our area after Protective Edge dissolved much quicker than we expected and we can’t agree to this kind of reality,” Shimoni was quoted by Ynet as saying. “This is the moment to change it.”

This marks the third rocket attack from Gaza in two weeks. Hamas claims the rockets are the work of dissident groups involved in internal struggles in the Strip.