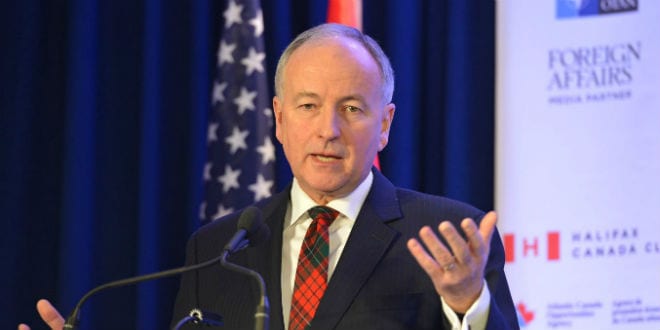 In his first official visit to Israel on Wednesday, new Canadian Minister of Foreign Affairs Rob Nicholson, reaffirmed his country’s unwavering support for the Jewish state. Nicholson reiterated Canada’s opinion that the realities of the Middle East leave the country no choice but to do everything it can to continually defend itself and its citizens.

“I am here to demonstrate, emphatically, Canada’s unwavering support for Israel,” Nicholson said. “We understand that Israel’s neighbourhood is as dangerous as Canada’s is peaceful, and so we know that Israel’s leadership has no choice but to take at all times, every step necessary to protect itself from the forces that are openly committed to its destruction.”

Nicholson, who took over from John Baird as Minister of Foreign Affairs in Canada after Baird resigned from the cabinet in February, met with Prime Minister Benjamin Netanyahu on Wednesday morning, followed by an afternoon meeting with President Reuven Rivlin.

“I am delighted to host you here on your first visit to Israel, I know you are dedicated to your work but I hope you have time to see our wonderful country and beautiful capital city of Jerusalem,” said Rivlin, as he greeted the Canadian minister. “You are a dear friend of Israel, and we listen to your comments with respect, even when we disagree.”

Netanyahu told Nicholson as they met in Jerusalem, “We believe we have no better friend than Canada. We think that this [Nicholson’s comment] is a refreshing wind in an increasingly hostile environment.”

Nicholson responded to the comments made by Rivlin and Netanyahu and said, “I am delighted to be here, I have taken an interest in Israel since I was a child and always wanted the chance to visit. I am honored to have this opportunity, representing my country as Foreign Minister.”

He continued to laud Israel even further, saying, “Israel is a beacon of light, hope, a source of democracy, and an example to the whole world, and I am proud of Canada’s steadfast, and consistent support for Israel.”

But Nicholson wasn’t done yet. He continued to describe some of the reasoning behind Canada’s staunch support.

“Even though we are far from here, we understand the challenges facing the region, and they are on everybody’s doorstep. We are not ones to stand on the sidelines and hope for the best, but want to be part of the solutions to the challenges that we face in the world. Part of my visit of course, is to demonstrate that commitment, that long term relationship between Israel and Canada that will continue in the future.”

Canada’s support for Israel has been unwavering under the leadership of Canadian Prime Minister Stephen Harper, who has been Prime Minister for the past nine years. However, as his third term in office comes to a close this October, there is some concern that rival Justin Trudeau of the Liberal Party will unseat Harper, and that he may change Canada’s position regarding its support for Israel.

Canada’s continued support for Israel is becoming increasingly important, as the continuing support that Israel has enjoyed from the U.S. seems to be faltering under the Obama administration.

On Tuesday, U.S. President Barack Obama said that the traditional US vetoes on UN resolutions condemning the Jewish State were becoming harder to justify.

“Up until this point, we have pushed away against European efforts, for example, or other efforts,” he told Israel’s Channel 2 television.

With the growing BDS movement, and continuing international pressure to enter into imbalanced negotiations with the Palestinians, Israel can use all of the international support available. The unwavering support it has received from Canada in the past nine years has been unmatched.