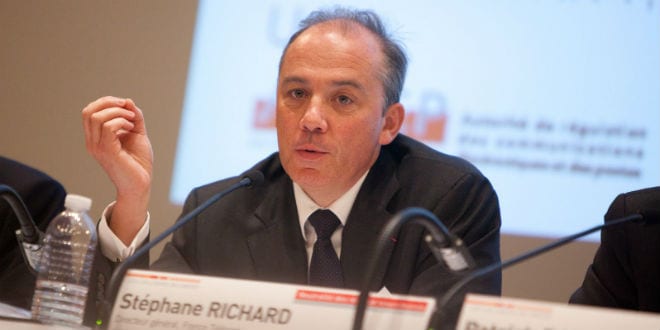 CEO Stephane Richard of French telecom giant Orange said he would cut ties with Israel “tomorrow” if he could, Associated Press reported Wednesday. Richard was speaking at a news conference in Cairo where he laid out his company’s plans for the coming years in Egypt.

Israel’s Partner Communications Ltd. is not a subsidiary of Orange France, but has a trademark agreement with the French company to use the brand name in Israel. The agreement was renewed recently and remains in force for the next ten years.

“I am ready to abandon this tomorrow morning but the point is that I want to secure the legal risk for the company” Richard told the press. “I want to terminate this, once again, but I don’t want to expose Orange to a level of risk and of penalties that could be really sizable for the company,” he said.

French human rights activists have been pressuring their government, which has a stake in the company, as well as the company itself, to cut ties with its Israeli counterpart due to Partner’s activities in Judea and Samaria. In late May, five NGOs and two unions, including CCFD-Terre Solidaire, the Association France Palestine Solidarité and the CGT (France’s General Confederation of Labor), asked Orange “to publicly communicate its willingness to disengagement and denounce human rights abuses committed by Partner,” according to Ynet.

Richard said his hands were tied. “Sorry to say, but a dispute with (a) partner when you have zero legal position in Israeli courts is not something that I would recommend for my company,” Richard said. “I am not going to pay hundreds of millions of euros only because I would have (to) take a risk, a huge risk, in terms of the penalties that we could have if we entered into this kind of brutal process.”

Partner CEO Haim Romano responded to news of Richard’s comments, telling Ynet that Partner is not a subsidiary of, nor owned by, France Télécom S.A., which owns the ‘Orange’ brand.

“Partner Communications Ltd. has been using the ‘Orange’ brand name since 1998, when the brand was still owned by Hong Kong company Hutchison Whampoa,” CEO Haim Romano said. “Partner signed a trademark licensing contract with France Télécom to use the brand name, which was just recently renewed for 10 years.

“We regret the comments made by Orange France’s CEO, if the comments were indeed made,” Romano continued, “and completely reject the comments.” According to the Times of Israel Romano also expressed concern such comments would anger Israeli subscribers.

Deputy Foreign Minister Tzipi Hotovely contacted the Israeli embassy in Paris following Richard’s comments and stated her intention to contact the CEO to protest his sentiments.

Should Orange follow through on Richard’s desires, it could cost the company hundreds of millions of dollars in penalties. Although Orange could prevent Partner from using the brand name in Israel, it would not affect the service the company provides to Israelis.

According to its website, Partner Communications Ltd. has 2.77 million subscribers in Israel, representing a market share of 28 percent.