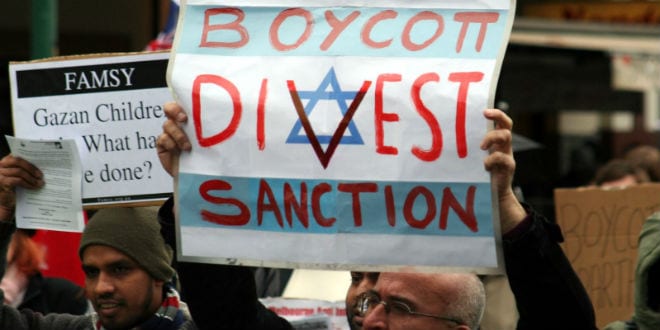 In a strong statement against the Boycott, Divestment and Sanctions (BDS) movement, New York State legislators are working on a bill which would prevent state pension funds from doing business with companies which boycott Israel. The state follows Illinois, which passed a similar law last month.

The charge is being led by Assemblyman Dov Hikind (D-Brooklyn), and already enjoys support from assemblymen on both sides if the aisle. Hikind, a staunch supporter of Israel, described the BDS movement as anti-Semitic.

“Thanks to a well-oiled propaganda machine, Israel is a uniquely vilified nation state,” said Hikind. “The BDS movement, the strategy of economic warfare, is rooted in anti-Semitism and a denial of Israel’s right to exist. It’s purpose is to delegitimize Israel.

“There’s no BDS movement against any other country,” he noted. “It’s time for New York State to make it clear where we stand.”

“At the core of the BDS movement is a quest to delegitimize Israel as a sovereign, democratic and Jewish state,” The Times of Israel quoted Chicago Jewish United Fund President Steven Nasatir as saying. “This bipartisan legislation sends a strong message that Illinois will not tolerate such efforts. We anticipate that this legislation will become a model for similar action in many other states.”

Hikind praised his counterparts in Illinois. “I applaud the lawmakers in Illinois who unanimously recognized the implicit lawlessness of boycotting Israel, and I am proud to raise my voice, along with my colleagues in the Assembly, in support of ending the unethical, disingenuous, and, frankly, racist boycott against this legitimate nation and its people.”

Speaking to IsraelNationalNews, Hikind pointed to the hypocrisy of the BDS movement. “What’s most remarkable is that there’s no other problem in the world, no other country in the world that they have an issue with,” he said. “They don’t have a problem with Russia, China, or any other countries which regularly carry out serious abuses of human rights. There’s only one place they target – a country so small you can hardly see it on a map of the Middle East.”

Hikind noted Israel’s strong democratic tradition by way of contrast. “There is hardly a country in the world where there is more open debate in the media… or in terms of civil rights and democracy, than Israel.”

Hikind called the legislation “just one part” of the battle against the anti-Israel narrative, but noted, “It represents a recognition that – in spite of the propaganda by BDS – this is a movement that is not simply ‘anti-Zionist’ but anti-Semitic,” he stated.

“When people are educated on this issue they recognize what this is all about. It’s not about settlements in Judea and Samaria, it’s about the very existence of the State of Israel.”