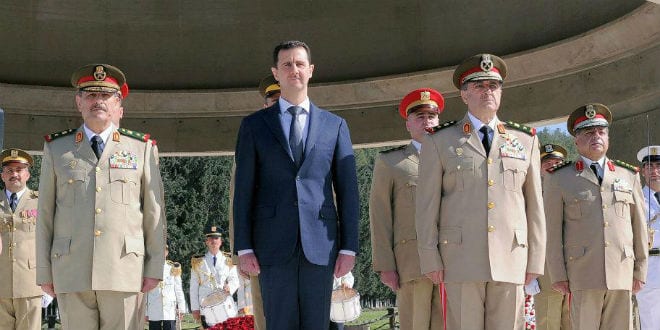 With the Syrian civil war well into its fifth year, President Bashar al-Assad’s government has outlasted many observers’ predictions of his demise. But recently, major setbacks for that government have led many to question whether or not these are indeed the Assad regime’s final days and to ponder what a post-Assad Syria might mean for neighbors such as Israel.

After defeating Syrian government forces in Palmyra, the Islamic State terror group now controls roughly half of Syria’s territory, although that mostly constitutes Syria’s vast deserts in the east. At the same time, Islamic State controls many of Syria’s major oil and gas reserves and is threatening to seize more.

Other rebel forces in northern Syria have captured a key military base in Syria’s Idlib province, pushing the Syrian regime further into their strongholds in Damascus and along the Syrian coast.  But if that pattern continues, “it will be very very difficult for [Assad] to secure his positions in these areas,” said Prof. Eyal Zisser, a Syria expert at Tel Aviv University (TAU).

“So it is still too close to call, but clearly the rebels are doing well,” Sisser told JNS.org.

As a result of the recent rebel and Islamist gains, the Syrian regime now only controls roughly 25-30 percent of the country, although that includes major cities such as the capital of Damascus as well as Tartus and Latakia along the country’s western coast.

In yet another major blow to the Syrian government, the London-based Arabic newspaper Asharq Al-Awsat reported that Russia, which has been a key ally of the Assad regime for decades and particularly during the civil war, has pulled key military experts from Syria. The report also suggested that Russia is no longer opposed to a future without Assad, saying, “The Kremlin has begun to turn away from the regime.”

Russia has been instrumental in providing the Syrian government with humanitarian, military, and financial aid, as well as diplomatic cover in the United Nations.

The recent shift in momentum against the Syrian government marks the decline of a pro-Assad network formed in 2012, when Iran invested heavily in Assad both in terms of military aid and manpower by recruiting Shi’a Muslims from Iraq, Pakistan, and Afghanistan to fight alongside the Syrian regime. Hezbollah, the Iranian-backed and Lebanon-based Shi’a Muslim terror group, also became involved in the conflict, helping Syria’s government push back against initial rebel gains and retake territory outside of its natural strongholds along the coast and in Damascus.

“Two years of Iranian assistance, at least at this juncture, has kind of reached the limits of what they can do for Assad, especially in terms of the manpower deficiency that Assad has,” Tony Badran, a Lebanese-born research fellow at the Foundation for Defense of Democracies (FDD) think tank, told JNS.org. “Hezbollah has kind of maxed out at this point.”

With each setback for the Syrian government, the country is moving closer towards breaking into regional cantons. Assad’s retreat to the Syrian coast is a natural consequence of Syria’s historic sectarian contours, Badran explained.

“The structural reality of Syria in terms of demography and geography has probably all but determined that Assad ended up in an Iranian protectorate in the west coast of Syria,” he said.

The Syrian coastal cities of Latakia and Tartus represent the heartland of Assad’s minority Alawite sect, which comprises roughly 10 percent of Syria’s population. The Alawites are an offshoot of Shi’a Islam, and therefore they have been allied with Shi’a Muslim Iran.

“It is true that over the last year Assad’s momentum has been stopped. Only [last] fall, many observers were predicting he would soon win [the country’s largest city of] Aleppo and, thereby, fundamentally shift the war in his favor,” Benedetta Berti, a research fellow at the Israel-based Institute for National Security Studies, told JNS.org.

“This has not happened and to the contrary, the regime has been losing ground,” Berti said. “In addition, the regime is suffering financially and the losses within the armed forces are very significant. … Still, the regime is not about to fall; it can keep going for a long time.”

Against the backdrop of the Syrian government’s struggles, neighboring countries like Israel and Jordan are concerned about the regions along their borders falling into the hands of groups like Islamic State. In May, reports indicated that Islamic State has attempted to gain a foothold in the Golan Heights region along the Israel-Syria border. The first such attempt by Islamic State occurred last month near Quneitra, where Syrian rebels were able to push back against an Islamic State-affiliated group called Jaysh al-Jihad.

“These are key battles, because [Islamic State] now has a presence in Syria’s south and because they are close to the ceasefire line with the Golan,” said Abdel Rahman, the head of the Syrian Observatory for Human Rights, AFP reported.

Another recent Islamic State attempt in the Golan Heights was thwarted on May 18 by the Free Syrian Army and the al-Qaeda-affiliated Jabhat al-Nusra terror group.

Despite Syrian rebel groups’ ties to the al-Qaeda terrorist organization and other extremists, Israel has a series of mutual interests with rebels in the Syrian Golan Heights in order to prevent Iran and Hezbollah from making gains in the region.

“Some in Syria joke: ‘How can you say that al-Qaeda doesn’t have an air force? They have the Israeli Air Force,’” Assad joked in an interview withForeign Affairs earlier this year.

Assad’s statement is actually not too far-fetched, as it has been widely reported that Israel has treated wounded Syrian rebel fighters in the Golan Heights, with some likely having ties with Jabhat al-Nusra.

FDD’s Badran described a fluid situation in southern Syria near the Golan Heights between rebel groups and Jabhat al-Nusra, with both entities mainly comprised of local tribes and clan leaders.

“A lot of these guys there fall along family and clan lines,” he told JNS.org. “It doesn’t strain reason that they would shift between al-Nusra and the non-Islamist rebel groups there.”

“The Jordanians, and thereby Israelis, have a lot of close links with these tribes,” Badran added, indicating that those countries have a mutual interest in protecting the Golan Heights region.

Both the rebel groups and Jabhat al-Nusra are primarily focused on preventing Iran and Hezbollah, as well as Islamic State, from gaining a foothold there.

“Recently, there were reports of Islamic State sleeper cells in the Golan Heights. They got dispatched very quickly, they don’t want these guys to pop up,” Badran said.

The Sunni Muslim rebel groups in the Golan Heights, along with Jabhat al-Nusra, have not launched any known attacks on Israel.

“They haven’t fired at Israel at all, or Jordan for that matter,” said Badran. “So they understand the geopolitics.”

In an interview with Al Jazeera, Abu Mohammad al-Golani, the leader of Jabhat al-Nusra, said his terror group’s focus is the downfall of the Assad regime rather than attacking the West.

“The instructions that we have are not to use al-Sham (Syria) as a base to launch attacks on the West or Europe, so as not to muddy the current war,” al-Golani said. “Our mission in Syria is the downfall of the [Assad] regime, its symbols, and its allies, like Hezbollah. … I assure you, Assad’s fall won’t take a long time.”

While Islamic State continues to make gains and threatens regime-held areas in western Syria, it remains unclear which actor in the civil war is the greatest short-term and long-term threat to Israel.

“Bashar [Assad] is the devil we know, and with [Hezbollah leader Hassan] Nasrallah we have some sort of a ceasefire. But [Hezbollah] has 90,000 rockets [pointed towards Israel]. The Islamic State is not as strong as they are, but very dangerous and cannot be deterred,” TAU’s Zisser toldJNS.org.

Israel needs to continue to “stay out of the war and watch the border closely, there is very little we can do,” Zisser said.

He added, “God knows, it’s either Hezbollah or the Islamic State, and they are both terrible options.”