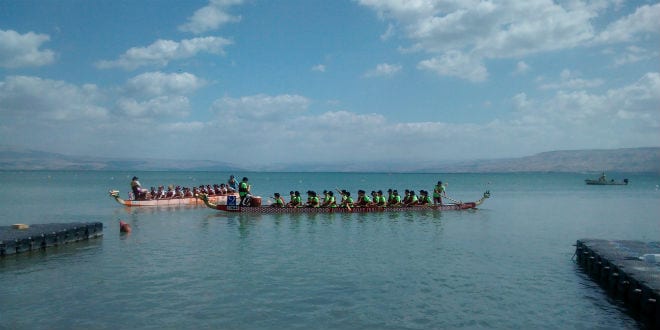 The third annual Dragon Boat Israel festival took place on the Sea of Galilee last week, with hundreds of competitors including a national team made up of both Chinese and Israelis, paddling their way to the finish line. The joint Canada-Israel initiative, spearheaded by Canadian native, Debbie Halton-Weiss, has raised tens of thousands of dollars for important Israeli causes.

Hailing from Ottawa, Halton-Weiss told Tazpit News Agency that when she first brought the ancient Chinese sport to Israel three years ago, it was the first time that dragon boat racing was introduced to the country. “Dragon boat festivals had been taking place in over 70 countries around the world including Canada, but at that time there was nothing in Israel.”

Halton-Weiss along with seven other Jewish women volunteers from her Ottawa community raised the necessary funds to purchase six dragon boats from China and brought them to the Kinneret. “We had to deal with a lot of bureaucracy because in Israel no one had ever seen dragon boats before,” she told Tazpit.

Subsequently, the women organized the first international Dragon Boat Israel festival with the help of Canadian and North American expertise in May 2012, where 20 teams from Israel and 19 teams from Israel participated.

“Our mission and vision is to bring people to the northern part of Israel to learn the sport of dragon boating, to have fun and build teamwork while raising funds for charitable causes.”

This year’s festival, whose newest charitable partner is Hebrew University, had 30 teams, most of whom were Israeli, including teams from Ex Libris, One Family Fund, Big Brothers Big Sisters, a breast cancer survivor team, as well as local teams from the Galilee region. Funds raised from this year’s festival will go to the Institute for Medical Research Israel-Canada in the Hebrew University’s Faculty of Medicine for the prevention and treatment of diseases including Alzheimer’s, cancer and autism.

“The sport has taken off in Israel since we introduced the dragon boats to the Kinneret,” Halton-Weiss told Tazpit.

Indeed, one Israeli dragon boat team known as the Ohalo Dolphins participated in an international competition at the World Club Crew Championships in Ravenna, Italy in 2013. It was the first time that an Israeli team participated in an international dragon festival outside of Israel and its team members included Bedouins, Christians, Jews, Druze, and Muslims. Another Israeli team is representing Israel in Taiwan.

“What is great about this sport is that it is accessible and inclusive for all,” said Halton-Weiss.

Dragon boat racing originated in China over 2,000 years ago and has been held annually according to the Chinese lunar calendar. Dragon boats are named as such because the stern of the boat features the traditional Chinese dragon. A team of people work the paddles or oars and one team member at the front of the boat beats a drum to maintain moral and pace.

China’s ambassador to Israel, Zhan Yongxin, opened this year’s two-day festival, conducting the ritual rice ceremony. Ambassador Yongxin showered the competitors with rice and wished them the best as they got ready to race in their Chinese dragon boats across the 300-meter course on the southwest bank of the Sea of Galilee.