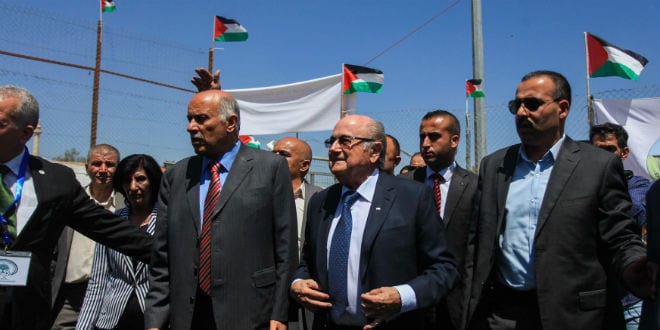 PFA chairman Jibril Rajoub surprised many when he announced the decision just ahead of the 65th FIFA congress in Zurich, reports The Jerusalem Post, and has drawn considerable ire from his own people. Protesters hacked the PFA’s facebook page Saturday, labeling Rajoub a “traitor”, while a petition being circulated calls for his immediate dismissal.

“This decision has caused enormous damage to the Palestinian cause and sports,” the petition reads. “The Palestinian people need serious leaders who are capable of achieving the right to self-determination.”

Rajoub rejected criticism from within, saying in a statement, “The decision was made in coordination with the Arab associations and our (other) supporters, and out of concern for negative responses from Israel.”  According to The Times of Israel, Rajoub added, “Palestine has not withdrawn its application completely, but merely suspended it.”

He claimed that despite the decision not to go to a vote, the PFA won some important concessions for its efforts. He noted FIFA Congress’s vote in favor of setting up a monitoring mechanism to oversee the treatment of Palestinian soccer teams was “an achievement that can be counted on.”

Blatter expressed admiration for the Palestinian decision and hope that it would lead to further cooperation between Palestinians and Israelis.

“For the 3rd time consecutively at a FIFA Congress the situation between two federations, Israel and Palestine, has emerged. Yesterday we witnessed how Palestine acted with a big heart,” he was quoted by Ynet as saying. Although the Palestinians were “convinced that they could win a vote”, they removed the proposal from the agenda. “This is an exceptional gesture that deserves to be commended, and I hope that this gesture will serve as a happy omen in the region between the two federations, but also between the two countries.

“Maybe football can be the precursor towards a solution that everybody wants. The two federations are independent, but they have proved that they can work together.”

Blatter won an eighth term as FIFA president at the congress, and leads the organization into a challenging time, as separate corruption investigations by the US and Switzerland have been opened against the association and its officials. Blatter has not been named in either investigation.

Unilateral steps on the part of Palestinians “will only push peace further away instead of bringing it closer.

“At a time when the international community is calling for confidence-building measures, the Palestinians are once again replying with an attempt to carry out unilateral steps that harm the ability to advance a regional settlement,” Netanyahu continued.