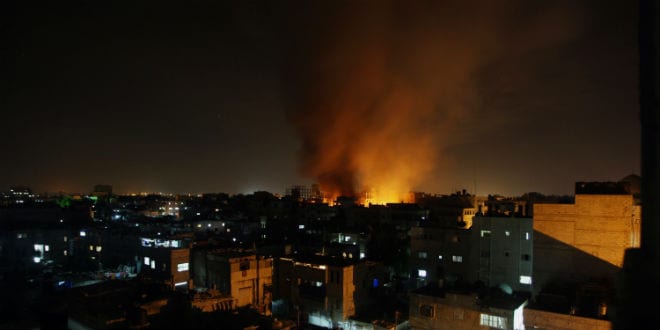 The defense minister said that should Hamas fail to control terror groups in the Gaza Strip, they will “pay a heavy price.”

Shortly after 9 pm on Tuesday, a rocket fired from Gaza exploded in southern Israel, setting of warning sirens across the area. The rocket landed near Gan Yavne, located outside Ashdod, the IDF said in a statement.

According to the army, the Grad missile was located within minutes of the sirens sounding in the Ashdod and Lachish region.

“Israel has no intention of ignoring attacks on its citizens like the one carried out last night by Islamic Jihad forces,” Ya’alon said in a statement. “We will not abide any threat on the residents of the south. If it isn’t quiet in Israel, the Gaza Strip will pay a heavy price.”

“I would not advise anyone to test us,” he warned. “We see Hamas as responsible for what happens in the Gaza Strip. It would be better for Hamas to rein in all attempts to fire at Israel and provocations. Otherwise we will have no choice but to respond with even greater force.”

Hamas has denied all responsibility of the attack. The rocket firing was due to an internal dispute within the Islamic Jihad terror group, who recently appointed a new commander over its northern regional activities, The Times of Israel reported.

The new commander was to take over operations on Tuesday but his predecessor, who opposed the move, led to led to violence between the commanders’ supporters.

Following the rocket attack, the Israeli Air Force launched airstrikes on “terror infrastructure” in the Gaza Strip early Wednesday morning. The IDF said in a statement that four sites were targeted and confirmed hit in the southern region.

“The reality that Hamas’s territory is used as a staging ground to attack Israel is unacceptable and intolerable and will bear consequences,” IDF spokesman Lt. Col. Peter Lerner said in a statement.

In response to the rocket attack, Israeli officials called on the government to take a firm stance with Hamas.

Yisrael Beytenu head and former foreign minister Avigdor Liberman said the government must topple Hamas or else appear “weak” in the eyes of the world.

“A government that is not willing to write as part of its guidelines that it intends to destroy the Hamas regime in Gaza is a government that displays weakness,” he stated. “If it does not pull itself together now it might as well end its rule now, immediately after it began, for the benefit of the citizens of Israel and the strength of the state.”

Likud Minister Miri Regev said Hamas, as the ruling power in Gaza, is responsible for any rocket fire emanating from the region.

“It’s too bad Hamas is trying to deteriorate the security situation in the south. Israel must respond to every attack on the citizens of Israel,” she stated.

The last time rockets were fired on Israel from Gaza was on April 23, Israel’s Independence Day.