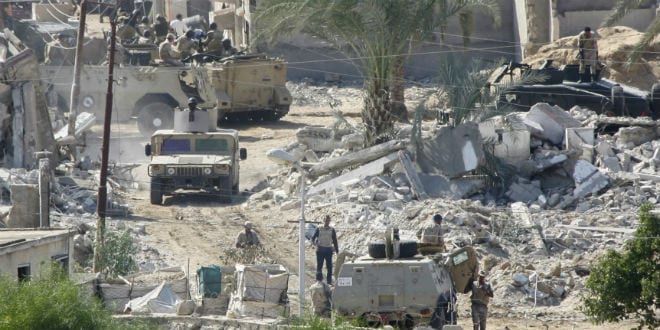 The Egyptian army has destroyed 521 access points to underground tunnels in the Sinai Peninsula leading into the Gaza Strip, an army spokesman confirmed.

Some of the tunnels extended as far as 2.8 kilometers (1.73 miles) from Gaza into Egypt. The tunnels, built by Hamas and other terror groups operating in the area, are used for anything from smuggling food, weapons and people across the border.

According to Samir, some of the destroyed tunnels were equipped with railroad tracks to help ease smuggling efforts while others held communications rooms. The spokesman added that the Egyptian army would soon reveal plans to destroy the tunneling network completely.

In October 2014, Egypt set up a security buffer zone between its border with Gaza in an effort to prevent tunnels of just this nature.

Egypt has waged a heavy handed military offensive against terror groups operating in the Sinai Peninsula for the past two years. The Sinai, which borders both Israel and Gaza, has been a hotbed of terror and smuggling activity both into the Strip and against Israel, with numerous attacks emanating from within the area.

According to a Middle East Monitor report, on May 13 Egyptian President Abdel-Fattah al-Sissi said that so far 80 percent of the tunnels connecting Gaza to Sinai have been destroyed, and that 150 bases of operation were destroyed with them. He also confirmed that 200 militants had been arrested in massive operations aimed at curbing the smuggling and terror network connecting the two geographic locales.

Part of the recent campaign by the Egyptian army also serves to crack down on the illegal economic trade route between Gaza and Egypt, was has been a major trade artery for the Hamas regime.