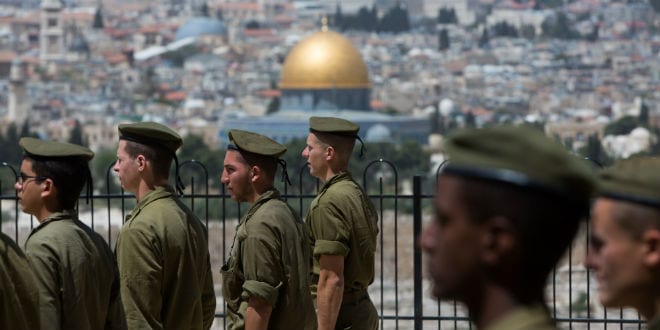 As Israel celebrates Jerusalem Day on Sunday, an alarming survey revealed that 50 percent of the Israeli public supports dividing the holy city.

Jerusalem Day, known in Hebrew as Yom Yerushalayim, commemorates the reunification and liberation of the city of Jerusalem by Israel during the Six Day War.

The survey, which was commissioned by the Binyan Kesher L’Yerushalayim organization and its “Im Eshkachech – Keep Jerusalem” initiative, asked Israeli respondents a number of questions pertaining to Israel’s relationship to Jerusalem as well as that of the Jewish nation.

According to the results, 28 percent of the Israeli public do not know why Israel celebrates Jerusalem Day. When asked what they thought the day commemorated, many respondents answered “the day of the destruction of Jerusalem.”

Even more troubling is that 15 percent of respondents who identified as religious Zionists did not know that Jerusalem was liberated during the Six Day War.

The survey also revealed that 50 percent of the public support dividing Jerusalem and handing over East Jerusalem and Arab neighborhoods to Palestinian control. In regards to the Old City, 23 percent said they were willing to divide the ancient city and give over the Muslim and Christian quarters and the Tempe Mount to the Palestinians.

Interestingly enough, when it came to handing over parts of the Old City to the Palestinians, the data dropped significantly, with only 4 percent agreeing to such a stipulation.

On a positive note, the survey revealed that a huge majority, some 80 percent of respondents, support significant construction in Jewish neighborhoods in East Jerusalem. Among the religious sector, 96 percent are in favor of further construction.

Chaim Silberstein, founder and president of the Binyan Kesher L’Yerushalayim organization, said that “the data revealed by the survey is disturbing and should set off alarms,” he explained in a statement.

“Withdrawing Israeli sovereignty from the Arab neighborhoods would create an Arab controlled corridor from Ramallah to Bethlehem, going through the center of Jerusalem. This would create a Gaza like situation, drawing all the terrorist organizations to the area with the goal of ‘liberating’ the rest of Jerusalem.”

Silberstein warned that “preconceived ideas are very difficult to correct, especially when there is a well-oiled and financed machine working relentlessly to persuade Israelis and the world as to the necessity of dividing up Jerusalem.”

He added, “Keep Jerusalem sees its task as impacting public opinion as to the importance of keeping Jerusalem united under Israeli sovereignty… If the current demographic trends continue as they are without major corrective actions, we might wake up in 15 years to an Arab Mayor of Jerusalem.”

The survey was conducted by the Teleclal Institute among 573 Israeli respondents.