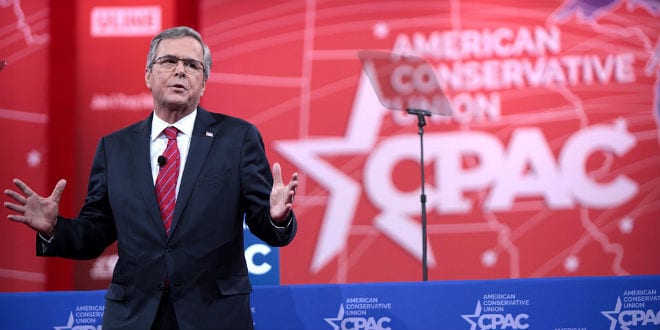 Former Florida governor and possible Republican presidential candidate Jeb Bush acknowledged last week that he takes his policy cues on Israel and the Middle East from his brother, former president George W. Bush. This surprised his audience, as he had been making a concerted effort to distance himself from his family’s political legacy, reported The Washington Post.

Being both the son and the brother of former US presidents, Jeb Bush has been trying to make a broader political name for himself ahead of an expected announcement of candidacy for the Republican Presidential nomination for 2016.

In February, he told an audience in Chicago, “I love my brother, I love my dad. I admire their service to the nation and the difficult decisions that they had to make. But I am my own man, and my views are shaped by my own thinking and my own experiences.”

Yet speaking last Tuesday to a group of high-powered investors at the Metropolitan Club in Manhattan, he named his brother as his most influential adviser on Israel-US policy.

“If you want to know who I listen to for advice, it’s him,” he said, according to four people present. Witnesses agreed to speak to the Post about the private meeting only on condition of anonymity.

The remark came in response to a question regarding Bush’s political aides and their views, particularly that of former Secretary of State James Baker, who has garnered some mistrust among Republican supporters for speaking to left-leaning Israeli advocacy group J-Street in March.

Jeb Bush expressed respect for Baker, but denied relying on him for advice, saying he turned to his brother, instead.

Spokesman Tim Miller claimed this relationship was nothing new. “Governor Bush has said before that his brother is the greatest ally to Israel in presidential history, he admires his stalwart support for our ally, and that is in line with his commitment to standing with Israel in the face of great threats to their security and our own,” Miller said in a statement Thursday.

George W. Bush’s foreign policy is seen as unpopular, particularly the protracted war in Iraq. However, he is also seen as one of the staunchest supporters of Israel to ever grace the White House.

Although championing a two-state solution to the Israeli-Palestinian conflict, W. Bush also denounced PLO ties to terrorism and insisted on new Palestinian leadership. He supported then-Prime Minister Ariel Sharon’s decision to withdraw unilaterally from the Gaza Strip while maintaining Jewish settlements in Judea and Samaria.

On the whole, the former president’s approach to the conflict is fairly balanced. However, as he made clear in a speech to Knesset in 2008 towards the end of his presidency, he steadfastly believes in what David Ben Gurion described as the “natural right of the Jewish people to be masters of their own fate,” and said the State of Israel was “more than the establishment of a new country. It was the redemption of an ancient promise given to Abraham, Moses, and David.”

Response at the meeting to the acknowledgement was mixed, with some attendees expressing concern it could damage Jeb Bush’s image, and others viewing the relationship positively.

Until now, the former governor has been staying away from his family for fear that voters dislike “political dynasties”. George W. Bush made a similar statement in April, at a conference of health-care technology experts.

“The role of family is not to be a political adviser or a policy adviser — there are plenty of those around,” said George W. Bush, according to Politico. “The role is to say, ‘Hey man, I love you.’”