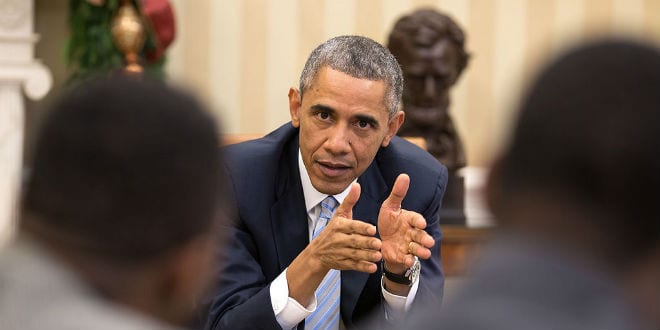 US President Barack Obama called on the new Israeli government to show “a genuine commitment to a two-state solution” and resolve what he called the humanitarian crisis in Gaza following last summer’s war.

In an interview with Asharq Al-Awsat, a London-based Arabic newspaper, the president expressed his hope that a solution would be found to the Israel-Palestinian conflict, but did admit that it was a “very difficult path forward.”

“I will never give up on the hope for peace between Israelis and Palestinians, and the United States will never stop working to realize that goal,” Obama stated.

“As I said when I visited Ramallah two years ago, Palestinians deserve an end to the occupation and the daily indignities that come with it; they deserve to live in an independent, sovereign state, where they can give their children a life of dignity and opportunity.”

“Only then can trust be rebuilt and a cycle of escalation avoided,” Obama added.

The relationship between Obama and Israeli Prime Minister Benjamin Netanyahu has been filled with increasing tension over the last several years. In numerous public spats between Washington and Jerusalem, the president has openly criticized the prime minister, especially for his stance against the emerging nuclear deal with Iran.

In March, Netanyahu was re-elected by the Israeli public, despite what many believe were covert efforts by the Obama administration to depose the prime minister. During the election, the prime angered western officials when he made comments declaring he would never agree to an independent Palestinian state.

Netanyahu seemed to backtrack after the election, clarifying that he wants a “sustainable, peaceful two-state solution” but under current conditions, with the Palestinian Authority partnering with Hamas, such a thing is impossible.

This past week, Netanyahu formed a right-wing coalition with a very slim governing majority. His coalition partners are mostly opposed to a two-state solution.

Obama admitted that the last round of US-brokered peace talks, which took place in April 2014, ended without any significant progress. Amid growing hostilities, Israel found itself at war with Hamas in the Gaza Strip some three months later.

“With the breakdown of talks, simmering tension in East Jerusalem and the West Bank, last summer’s conflict in Gaza, and serious questions about overall commitment to a two-state solution, it’s no secret that we now have a very difficult path forward,” the president explained. “As a result, the United States is taking a hard look at our approach to the conflict.”

“Addressing the lasting impact in Gaza of last summer’s conflict should also be central to any effort,” Obama stated. “Ultimately, the parties will need to address not just Gaza’s immediate humanitarian and reconstruction needs, but also core challenges to Gaza’s future within a two-state context, including reinvigorating Gaza’s connection with the West Bank and reestablishing strong commercial links with Israel and the global economy.”

The US president and his officials have issued several warnings to Netanyahu should he back away from peace talks with the Palestinian. Following Netanyahu’s re-election, an Obama spokesman warned that the US would “reevaluate our position” on its support for Israel.