Knesset in Turmoil Over Netanyahu’s Bid to Expand Cabinet Size 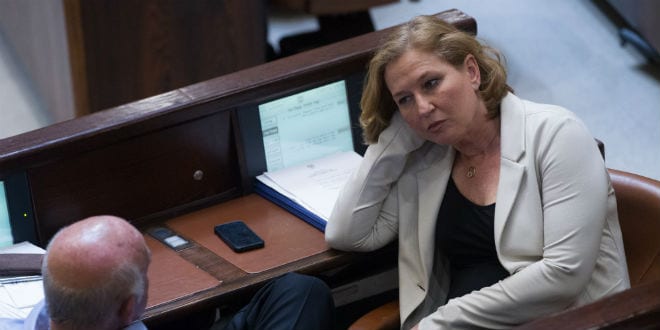 After a five-month hiatus, Israel’s Knesset went back to work this week, and the first order of business was to undo the effects of a bill passed by the previous government.

Amid petitions to the High Court and by the narrowest possible margin, a new bill, which would permit Israeli Prime Minister Benjamin Netanyahu to appoint 20 ministers, as well as ministers without portfolio, passed its first reading Monday night.

In 2014, Netanyahu’s previous government passed a Basic Law proposed by then-coalition partner Yesh Atid to limit the size of any future government to 18 ministers (besides the prime minister), four deputy ministers, and to ban the appointment of ministers without portfolio. It should be noted that the previous government had 22 ministers, as the bill was set to take effect upon the following government, not the one that passed it.

Now, Netanyahu has proposed delaying the implementation of the previous bill, not because he rejects the basic principle behind it, but “because of the political constraints involved in forming the 34th government…[and] the need to give the agreed-upon representation to the coalition partners in order to create a stable government,” according to the bill’s explanatory preface.

“The prime minister, who has yet to form his next government, is in a situation in which he has to buy the votes of his party members so they will lend their support,” Tzipi Livni, co-leader of the Zionist Union, was quoted by Ynet as saying.

Yesh Atid chairman Yair Lapid attacked Netanyahu’s integrity for undermining the previous bill. “He said it was something important to the State of Israel. I took it seriously. The problem is we are sitting here and voting every time and thinking politics is a game, and cynicism controls our lives, and no one is taking this seriously,” Lapid said.

His party submitted a petition Sunday to the High Court to freeze the legislation before it could be passed. The court rejected the petition Monday, saying it was submitted prematurely. “The requested staying order was aimed primarily at a legislative process currently underway,” the court decision stated.

On Monday, Livni’s coalition partner, Isaac Herzog, called on the prime minister’s coalition partners to overturn their agreements with Netanyahu.  “I call upon your feeling of national responsibility that brought you to this building. You won’t be able to lead the country by supporting Netanyahu’s path. We won’t let you lead, you won’t be able to function,” he was quoted by Haaretz as saying.

Yet not all of the Likud party’s opponents were so critical. Zionist Union MK Shelly Yachimovich acknowledged, “I cannot say for certain that had we formed the government, we would not have done the same out of necessity.”

Meanwhile, the Zionist Union has also threatened to take legal action against the new bill. The party’s lawyers has reportedly sent a letter warning Netanyahu and Knesset Speaker Yuli Edelstein of its intentions.

According to party lawyers, the 2014 amendment stipulated it could only be overturned by a majority of 70 MKs. This is the reason Netanyahu seeks only to delay its implementation, not overturn it. However, the Likud Party’s contention that the delay is a temporary political necessity, “will be valid any time a government is formed under the Israeli electoral system, and so the [new] amendment will in effect render the [2014] Basic Law meaningless.”

The letter continues, “Any attempt to bring to the Knesset for approval a larger government” without obtaining 70 votes as stipulated in the Basic Law “is illegal, and my client will pursue all means available to him under law to prevent this illegal situation, including appeals to the courts.”

Not content with challenging Netanyahu on cabinet size, Herzog has also submitted a bill to dissolve the nascent government and call new elections. The bill notes that “the 34th government of the State of Israel leans on a casual and technical majority of 61 coalition MKs against 59 opposition MKs.” Coalition agreements signed under pressure “embody significant harm to the value of a political regime,” NRG quotes the bill as saying.

“Thus public money is funneled clandestinely to maintain a narrow and ineffective government that will prevent reforms or any kind of change during days when the State of Israel and Israeli society are facing great challenges. In light of this, it is proposed to disperse the 20th Knesset and let the people re-elect its representatives,” the bill continues.

At a faction meeting, Herzog said, “Netanyahu is trying to establish a 61-MK government. I don’t intend to help him establish a government of 61, but to replace him. If not in this Knesset, then in another round of elections.”

The proposed amendment must undergo a second and third reading, and is expected to face fierce objection over the next few days. The final vote is set for Wednesday, when Netanyahu’s new government was initially scheduled to be sworn in. The swearing in may be delayed, however, and could take place as late as Monday, since the law allows up to a week from the announcement of the coalition.