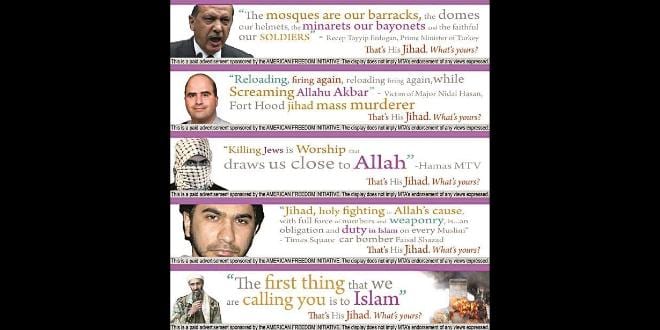 The New York Metropolitan Transportation Authority (MTA) voted Wednesday to ban all political or religious ads from its buses and subways, following a court ruling that it must run a controversial ad which it claimed would incite violence, The New York Times reported.

In response, the group which sponsored the contested ad appealed to the court to strike down the MTA ban, citing their First Amendment rights.

The campaign was a parody of one run earlier by the Council on American-Islamic Relations (CAIR) which strove to demonstrate that the term “jihad”, commonly associated with killing non-believers in the name of Islam, has a gentler interpretation as a “personal goal”. Three of the four ads in the AFDI campaign were accepted by the MTA, but the fourth, which included the line “Killing Jews is Worship that draws us close to Allah”, was not. Following a ruling in late April by district court judge John Koeltl in Manhattan requiring the transit company to run the ad, the MTA board voted Wednesday to ban all political and religious ads from its system. Government and public service ads will still be accepted under the decision. MTA officials explained the recurring challenges were becoming a distraction. In 2012, the MTA lost another lawsuit to AFDI over an earlier ad.

Safety was also a consideration, MTA general counsel Jerome Page said. “We drew the line when we thought our customers, our employees and the public were in danger,” he said. “The judge gave short shrift to those concerns.”

The board decision was not unanimous. Board member Allen P. Cappelli is one of two who voted against the move. He told the Times, “It is offensive to me as a citizen that the board would even be considering taking such a radical approach to deny the constitutional rights of New Yorkers.”

According to Haaretz, New York follows the lead of Los Angeles, Chicago and Philadelphia, which have all banned political advertising from their public transit systems. AFDI immediately appealed the MTA move. In a letter to the court Thursday, the group claimed their “public service advertisement is an educational message,” and that the MTA’s position was “legally deficient, if not frivolous,” the New York Post reported.

The group also asked the judge to order the MTA to run the ad immediately. After his initial ruling, Koeltl had permitted a one-month delay to allow the transit authority time to appeal the decision. The MTA claims their new policy negates the need for an appeal.

The MTA said Thursday it was considering the AFDI’s letter.