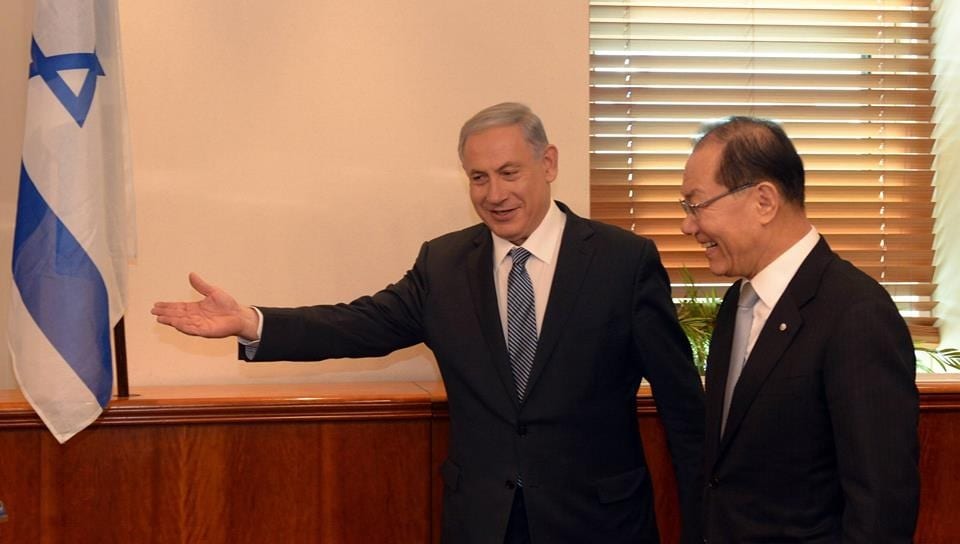 It appears that world powers are closer than ever to a nuclear deal with Iran, which US Secretary of State John Kerry described to the UN on Monday as a “good, comprehensive deal,” and if accomplished, one that “will make the entire world safer.”

“We have a great deal to learn from each other and be inspired by each other,” Netanyahu said in regard to South Korea and Israel’s relations. “But we also heed the example of the negotiations with North Korea, the nuclear negotiations,” said the Israeli prime minister.

“It was said that the inspections would prevent proliferation. It was said then that they would moderate North Korea’s aggressive behavior,” said Netanyahu. He also noted that there were expectations that North Korea would eventually integrate into the family of nations following negotiations.

In 1994, North Korea pledged to freeze and dismantle its nuclear weapons program in a nuclear agreement signed with the United States in exchange for international aid to create two power-producing nuclear reactors.

Four years later, North Korea fired a rocket over Japan, which landed in the Pacific Ocean, and the US demanded inspections of North Korea’s suspected construction of an underground nuclear facility.  US inspectors found no evidence of nuclear activity several months later, and in 1999, then-US President Bill Clinton agreed to ease economic sanctions against North Korea.

In the same year, the US-led international consortium signed a $4.6 billion contract to build two nuclear reactors in North Korea, which by 2001, North Korea declared that it was unsatisfied with US progress on the project and threatened to restart its nuclear program again.

In 2002, following US accusations of violations of the 1994 nuclear agreement, North Korea admitted that it had been operating a uranium enrichment facility. At the end of the year, North Korea expelled International Atomic Energy Agency (IAEA) inspectors and reactivated its nuclear power facilities in 2003. North Korea also officially withdrew from a 1992 agreement with South Korea to keep the Korean Peninsula free of nuclear weapons.

In the span of the next decade, nuclear talks between the US and North Korea floundered as more agreements were made and broken. At one point in October 2008, the US State Department announced that North Korea would be removed from the US list of states that sponsor terrorism.

But by February 2013, North Korea had conducted its third underground nuclear test and a year later, according to the South Korean Defense Ministry, North Korea launched four scud missiles in the direction of Russia, all of which fell into the sea.

In January 2015, the US imposed new sanctions on North Korea.

During the meeting with the South Korean deputy prime minister, Netanyahu noted that he believes the current Lausanne framework would repeat the mistakes made with North Korea.

“I think freeze and inspect is not an adequate substitute for dismantle and remove. Under the Lausanne framework, Iran is left with the ability to develop with R&D advanced centrifuges that actually advance its nuclear program. And needless to say, I don’t think there’s any effective inspection,” said Netanyahu.

“So I think a repetition of these mistakes is a great historic blunder,” emphasized the Israeli prime minister.