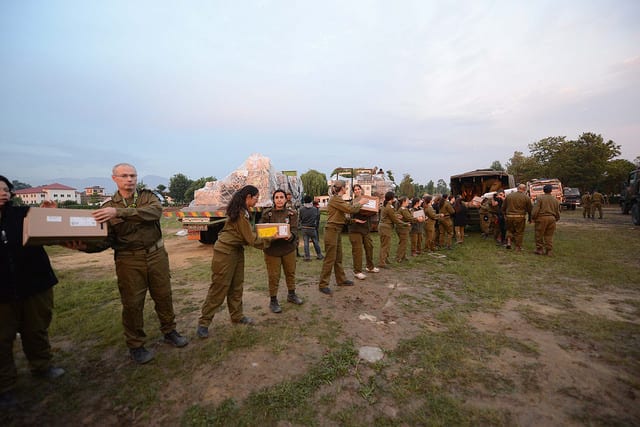 Israel Defense Forces (IDF) members arrived in Nepal on Tuesday and began setting up a field hospital, where they will treat those injured by this week’s massive earthquake. The local Nepalese military hospital has been badly damaged, according to reports, and the number of people killed in the earthquake has risen above 4,000.

The Israeli soldiers are working closely with Nepalese soldiers by loading equipment, medicine, and supplies into trucks. The 260-member IDF delegation includes 127 medical personnel, among them 40 doctors.

According to the IDF, the mission to help Nepal after the earthquake could take at least two weeks. The IDF delegation is joined by rescue teams from United Hatzalah, Zaka, F.I.R.S.T., IsraLife, IsraAID, and others.

The Jewish National Fund (JNF), meanwhile, pledged assistance to 160 Nepalese students who are studying at Israel’s Arava International Center for Agricultural Training, a JNF partner. Some of the students lost family members in the earthquake, and all of their families lost their homes.

“We have a longstanding relationship with Nepal and these students are our extended family,” JNF President Jeffrey E. Levine said. “That’s why I am today releasing emergency funds so that each one will get $500 to send back home and assist in rebuilding their family homes and lives. … When you look into their eyes, you can see that they have lost everything. The $500 may not seem like much to us, but it means the world to them.”