UN: Israel Responsible for Deaths at UN Schools in Gaza from where Terrorists “Probably” Fired Rockets 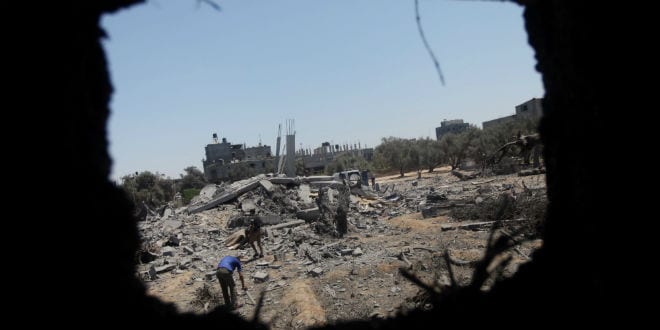 An official UN inquiry has found “Israeli actions” during last summer’s Gaza war responsible for the death of 44 Palestinians and injuries of 227 others at UN locations.

UN Secretary Ban Ki-moon called the deaths deplorable. In a letter to the UN Security Council accompanying the report, the UN chief wrote: “I deplore the fact that at least 44 Palestinians were killed as a result of Israeli actions and at least 227 injured at United Nations premises being used as emergency shelters.”

While investigators blamed Israel for the deaths and injuries, the report noted that it has found proof that Palestinian terrorists used at least three empty UN schools to hide weapons and in two cases, terrorists “probably” fired rockets from schools.

The inquiry found that at many UN locations in Gaza, there was very weak security that most likely allowed “Palestinian armed groups” to use the locations to fire rockets at Israel.

Ban said it was “unacceptable” for the Palestinian terrorists to use UN locations as a form of shelter against Israel.

The 207-page UN report looked into 10 incidents during the war. Ban ordered the commission to investigate Israeli actions in November 2014 after a visit to Gaza. Some 223 Gaza schools, either run by the UN or the Hamas terror group, were hit during the fighting.

In many instances, weapons caches belonging to Gaza-based terrorists were uncovered in numerous UN schools. Terrorists would also booby-trap UN locations with explosives, knowing that IDF soldiers would be searching the locations.

After the first instance of rocket fire from an UN run school, UN officials called on Hamas to remove the rockets rather than destroy them, thereby turning the weapons back over to terrorists to be used against Israel. In a report released by the IDF after the war, the army revealed proof of UN locations serving as entrances to terror tunnels and the common use by terrorists of human shields to deter Israeli action.

Israel’s Foreign Ministry said in a statement that it had received a summary of the report ad would “study it carefully, with a view to continuing its cooperation with the UN secretary general and his staff regarding the protection of UN facilities, particularly in periods of armed conflict.”

The statement makes clear that the UN report “clearly documents the exploitation by terrorist organizations of UN facilities in the Gaza Strip” and that Israel is committed to protecting civilians and UN staff.

“All of the incidents attributed by the report to Israel have already been subject to thorough examinations, and criminal investigations have been launched where relevant,” the statement added.