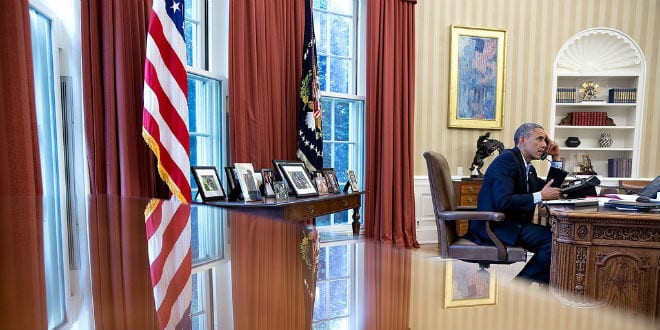 US President Barack Obama has known for years that Iran is just months away from a nuclear bomb, yet kept it to himself until it was convenient, reported Bloomberg Tuesday.

According to the report, the Obama administration has long estimated a two- to three-month breakout time, yet only declassified this information April 1, “just in time for the White House to make the case for its Iran deal to Congress and the public”.

Energy Secretary Ernest Moniz acknowledged to the news agency that the US has known for “quite some time” that Iran is closer to a bomb than the administration has let on. He added that Iran is “right now spinning, I mean enriching with 9,400 centrifuges out of their roughly 19,000. Plus all the . . . . R&D work. If you put that together it’s very, very little time to go forward. That’s the 2-3 months” estimated for Iran to produce enough fissile material for a nuclear weapon.

Yet all this time, Obama has insisted that Iran was not nearly that close to achieving a nuclear bomb. Back in 2013, before a visit to Israel, Obama told Israel’s Channel Two, “Right now, we think it would take over a year or so for Iran to actually develop a nuclear weapon, but obviously we don’t want to cut it too close.”

That same year, in an effort to downplay Israeli Prime Minister Benjamin Netanyahu’s more alarmist estimate of six months, Obama told the Associated Press in October, “Our assessment continues to be a year or more away. And in fact, actually, our estimate is probably more conservative than the estimates of Israeli intelligence services.”

David Albright, a former weapons inspector and president of the Institute for Science and International Security, told Eli Lake at Bloomberg that he felt the administration was being intentionally vague in 2013.

“They weren’t clear at all about what this one-year estimate meant, but people like me who said let’s break it down to the constituent pieces in terms of time to build a bomb were rebuffed,” he said. Albright and his group came up with their own estimate, measuring only the production of highly enriched uranium, concluding that Iran was a mere month away.

A spokeswoman for the National Security Council downplayed Albright’s numbers to USA Today, saying the intelligence community maintains “a number of assessments” of the time Iran needs to become a nuclear threat.

Albright’s position, however, is supported by leaked International Atomic Energy Agency (IAEA) document, first published by the Associated Press in 2009. It concluded Iran “has sufficient information to be able to design and produce a workable implosion nuclear device based upon (highly enriched uranium) as the fission fuel.”

Kenneth Pollack, a former CIA analyst who is now an Iran expert at the Brookings Institution, told Lake that estimating breakout times is an imprecise business. “The idea there is such a thing as a hard and fast formula for this is nonsense,” he said. “All the physicists come up with different answers depending on what inputs they use.” This makes Obama’s manipulative use of a foreshortened timeline all the more sinister.

On April 2, Obama identified one benefit of the nuclear framework deal, saying, “even if it violated the deal, for the next decade at least, Iran would be a minimum of a year away from acquiring enough material for a bomb.”

Representative Devin Nunes, the Republican chairman of the House Permanent Select Committee on Intelligence doesn’t buy it. “We’ve been researching [the administration’s] claim that a deal would lengthen the breakout time for Iran from two to three months to a year,” he told Lake. “We’re just trying to confirm any of their numbers and we can’t confirm or make sense of what they are referencing.”

Israel has consistently maintained that a nuclear Iran is a dire threat to the security of the entire world, and that successive US agreements with the Islamic Republic have put Israel in grave danger. Netanyahu has said on numerous occasions that “Israel will not allow Iran to develop a military nuclear capability,” or endanger Israeli citizens.