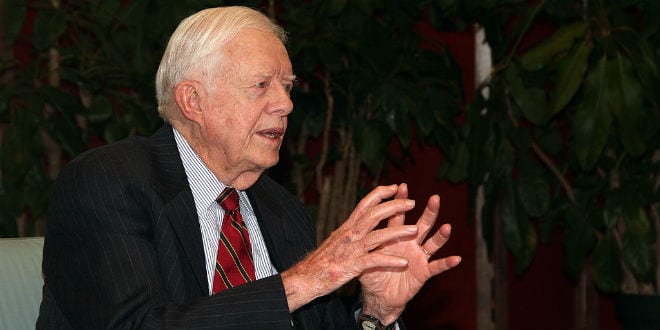 Both President Reuven Rivlin and Prime Minister Benjamin Netanyahu have refused requests from former US President Jimmy Carter to meet during the latter’s upcoming visit to the region, reported Israel’s Channel 10 news Monday. The decision was made following consultations with the Foreign Ministry and the National Security Council.

Carter is scheduled to visit Israel and the Palestinian Authority in early May, and his request to enter Gaza at that time was granted. However, in light of Carter’s negativity towards Israel and its policies, the Foreign Ministry recommended no government officials at any level meet with the former president, sending a message that his attitude is not acceptable.

Carter has a long history of antipathy towards the Jewish state. In 2006 he penned a book called Palestine: Peace not Apartheid, in which he blamed the lack of peace in Israel on “Israel’s continued control and colonization of Palestinian land”, calling Israeli policies “the primary obstacles to a comprehensive peace agreement in the Middle East.”

Despite factual errors in his book which were revealed after publication, it did not stop Carter from continuing to promote his perspective, prompting the Committee for Accuracy in Middle East Reporting in America to accuse him of “clearly” having “an Israel, and even a Jewish problem.”

During last summer’s Operation Protective Edge, in which Israel entered Gaza in an effort to put an end to rocket fire from the Palestinian territory and eliminate the threat posed by terror tunnels dug under the Israel-Gaza border, Carter stated publicly that there was “no justification in the world for what Israel is doing,” decrying what he called the “humanitarian catastrophe” inflicted on Gaza.

He urged President Barack Obama at the time to remove Hamas from the State Department’s list of terrorist organizations. Carter has also supported various unilateral Palestinian bids for recognition in the UN and its constituent bodies.