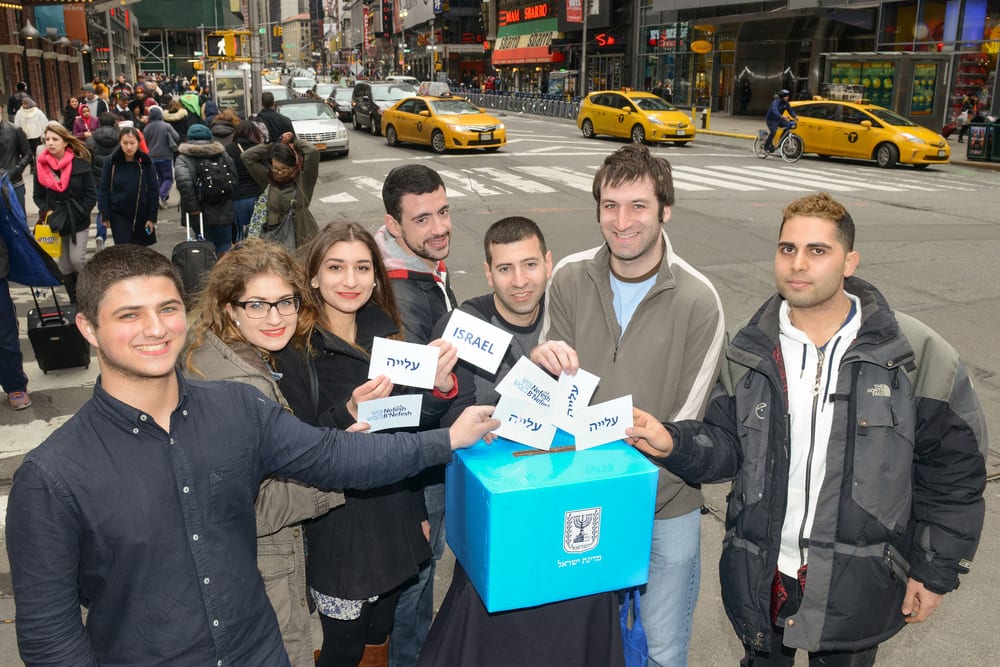 “I want to be a part of something greater than myself,” says 24-year-old Ron Nahshon of New York City’s Washington Heights neighborhood, who is preparing to move to Israel this summer with his wife Sara.

Born in Israel, Nahshon’s parents (who made aliyah themselves) left Israel when he was only 1. Raised in the Conservative movement, he describes his upbringing as “Zionist” and says his parents infused “a love of the land” into their home. Later, Nahshon became Orthodox and attended Yeshiva University. Over the past several years, he has been investing and saving to prepare for aliyah.

“I grew up learning how my grandfather trekked to [Mandatory] Palestine on a camel. Now, I just have to get on a plane and fly there. It’s easy to get comfortable elsewhere. By moving to Israel, I am able to live a part of history and tradition in a way that people two, three, and more generations back didn’t have the opportunity to do,” Nahshon tells JNS.org.

Nahshon was among the more than 1,200 people who attended the Nefesh B’Nefesh (NBN) aliyah agency’s mega event in New York City last month. He says the event turned his vision of aliyah into a reality.

NBN has served as what Nahshon calls a “friendly middleman,” assisting his family with the extensive paperwork needed to make aliyah. At the event, the Nahshons visited the booth for Haifa (where they will be living), spoke with shipping companies, and learned how Sara will be able to transfer her nursing license from the U.S. to Israel so that she can work in her field.

“The Israeli government was always open to receiving new immigrants—about 1.3 million people made aliyah in the first three years since the founding of the state,” Rosenberg tells JNS.org. Many of those people were refugees fleeing to the Jewish state to escape persecution or other challenges in their native countries. Even today, crises such as anti-Semitism in France and political upheaval in Ukraine have spurred increased aliyah from those countries. But North American Jews “have a choice,” says Rosenberg.

“They are choosing to come to Israel. So we have to treat them differently,” he says. This was the catalyst behind the founding of NBN by philanthropist Tony Gelbart and Executive Director Rabbi Yehoshua Fass. The agency facilities aliyah exclusively from North America and the United Kingdom.

According to Rosenberg, whereas initially the average immigrants to Israel via NBN were entire Orthodox families, today the organization is seeing a steep rise in single young adults and boomers.

Boomers tend to be retirees or empty nesters, people who sold their businesses or are consulting and want to live in Israel. Some of them have children—and therefore grandchildren—living in the Jewish state, and they want to be close to them.

“The healthcare is wonderful. There are nine months of wonderful weather,” Rosenberg explains, adding that for young adults, there is a correlation between aliyah and those who participated in Taglit-Birthright Israel trips and The Jewish Agency for Israel’s MASA (Israel Journey) programming.

“More young people are visiting Israel and they want to come back,” he says.

There is also a tie to the flailing American economy. Rosenberg says that with the rising costs of American education and the unpredictability of the job market, many young adults are attracted to the free degree they receive through making aliyah and the ability to readily enter the job market based on skills and not degrees, as is often the case in Israel.

“They are seeing this as a stepping stone to their future,” Rosenberg says. With the global economy growing and the world feeling smaller and more connected all the time, Israel makes more sense as a long-term option for laying down roots. Last year, between 1,400 and 1,500 young adults were among North American immigrants to Israel.

Boomers and young adults were certainly among the crowds at last month’s aliyah events, says Yael Katsman, NBN’s director of communications and marketing. There was also a diverse mix of religious affiliations in attendance. Among the participating young adults, 65 percent defined themselves as non-Orthodox, and among families with young children, 70-75 percent identified as Orthodox.

Katsman says that “success breeds success.” Families who make to Israel it tell their friends, who then want to come as well. During last summer’s war between Israel and Hamas, NBN saw no aliyah cancellations—the planes were full, Katsman says. Additionally, she says that while NBN sees European Jews choosing aliyah because of increased anti-Semitism, that does not seem to factor heavily into most North American Jews’ decisions to move to Israel.

To accommodate this growth in aliyah, NBN has evolved its events. In 2002, they were dozens of smaller-scale meetings, which the organization still offers. But today, NBN also hosts five “mega events” with aliyah-related seminars and workshops and an Israeli vendor marketplace in Los Angeles, Toronto, Montreal, Miami, and New York. Israeli professionals from a variety of aliyah-related fields—including shippers, accountants, financial planners, insurance, healthcare, real estate, universities, and more—help prospective immigrants to Israel advance their aliyah plans. To date, more than 50,000 North American and British Jews have attended NBN pre-aliyah information seminars. Since its founding in 2002, NBN has assisted more than 42,000 newcomers to Israel.

Ron Nahshon says he is hopeful about life in Israel.

“Many people say that going to Israel is ‘a dream of mine,’” he says. “Then they get a job, have a family, and they look back with regret. It is easy to say you’ll do it in the future. It says in Ethics of the Fathers, ‘If not now, when?’ Sometimes you just have to seize the moment.”