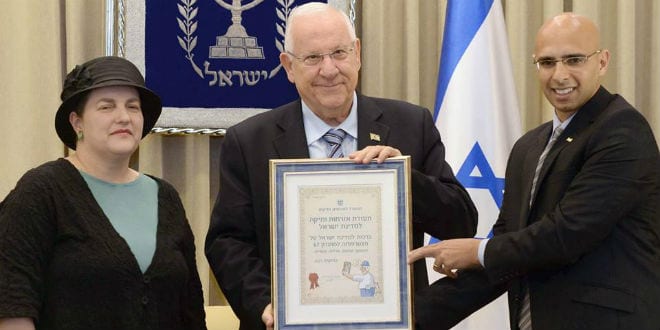 Israel’s president Reuven Rivlin received a senior citizenship card — not for himself, but on behalf of the State of Israel, The Jerusalem Post reported.

Rivlin himself has been a senior citizen for the past eight years, by Israeli standards. The State, however, is marking 67 years since its independence in 1948 next month. In honor of the occasion, the late minister of senior citizens’ affairs, Uri Orbach, suggested the country’s premier citizen, the president, receive a card to mark the milestone.

Although the Hebrew word for state is medina, which is feminine, Hebrew grammar dictates that the masculine form dominates when even one male is present, thus the state, made up of both males and females, becomes a senior citizen at 67, which is retirement age for men. The official retirement age for women is 62.

MK Orbach had hoped to make the honorary presentation himself, but he lost his battle with a blood disorder in February. His widow, Michal, made the presentation in his place, along with Gilad Semama, the director-general of the Senior Citizens Ministry. In attendance will be a group of seniors who grew up with the state, themselves all aged 67.

According to the paper, many current Israeli lawmakers are rapidly approaching retirement age, and some have already reached it. Prime Minister Benjamin Netanyahu will be eligible in October 2016. Labor MK Nahman Shai, at 68, is already a senior citizen, as are Yesh Atid MKs Yael German, 67, and Yaakov Peri, 71, Yisrael Beytenu’s MK Sofa Landver 64, and United Torah Judaism MK Menachem Eliezer Moses, 68. At 72, the Likud’s Bennie Begin is the oldest serving Knesset member. Knesset members and government ministers are permitted to serve past retirement age.