President Rivlin: Israel’s Fallen Soldiers “Laid Down their Lives for Us to Live”

Home » President Rivlin: Israel’s Fallen Soldiers “Laid Down their Lives for Us to Live” 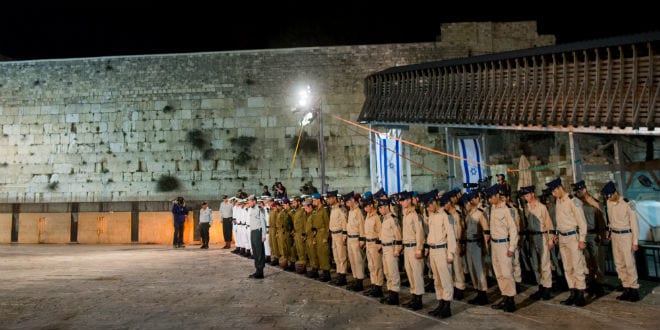 The national memorial ceremony took place at the Western Wall Plaza, where a memorial flame was lit by the president and the widow and orphan of an IDF soldier who died during Operation Protective Edge.

Surrounding the plaza, soldiers from the IDF, IAF and IDF Navy stood at attention.

Speaking after a minute-long siren sounded throughout the country, which brought the nation to a standstill, the president mourned the sacrifice of 23,320 of Israel’s fallen. Rivlin urged all Israelis to honor their memories by fighting for the “essence and idea for which the State of Israel was established.”

“The deaths of those who died defending our home force us to deepen our commitment to building that home as a more just home, a more compassionate home, a home where not only those who have fallen, but all those within it are equal,” he stated.

This year’s Memorial Day is especially painful for many Israelis as the country is still recovering from last summer’s 50-day war with Hamas. During Operation Protective Edge, 67 IDF soldiers lost their lives. The president reflected on the national pain felt for each soldier’s death and his encounters with the families of the fallen.

“The geography of pain, as I learned, stretched the length and breadth of the country, yet it did not divide it,” Rivlin stated. “Death struck at the door of many, regardless of their religious beliefs. No camp was left untouched by death.”

The president explained that while Israel should work hard to prevent future conflict and war, it must also be prepared and be aware of reality.

“We are obligated to continue to live, for the sake of our loved ones who are lost, and for our children who remain…They tried to eradicate us from the face of the earth, and we survived,” he said.

Rivlin noted that Israeli society is one large family, and the death of a member of the tribe is felt across the nation.

“The bereaved family is intertwined, with a shared fate. A fate which was forced upon them. Israeli society, with all its camps, is connected not just in terms of shared destiny, but in terms of purpose and meaning,” he stated.

Israel’s fallen, “who laid down their lives not for us to merely survive, but for us to live…this is our debt to their courage and their lives that are no more.”

Speaking after Rivlin, IDF Chief of Staff Gadi Eisenkot paid his respects to “the memory of our comrades in arms, Israel’s fallen who have died in the war for the independence of the State of Israel and the security of its people.”

Reflecting back on Israel’s recovery of Jerusalem and the soldiers who lost their lives so Jews could once again inhabit the holy city, Eisenkot said the Western Wall from where he spoke represented the “great history of our people” and “the ability of the people of Israel to build and grow, to defend ourselves and to fight for our existence as a united, independent and strong people.”

“Our soldiers stand shoulder to shoulder, united in determination and courage, in the face of enemies north and south, and work together by land, air and sea at all times to strengthen the security of the state.”