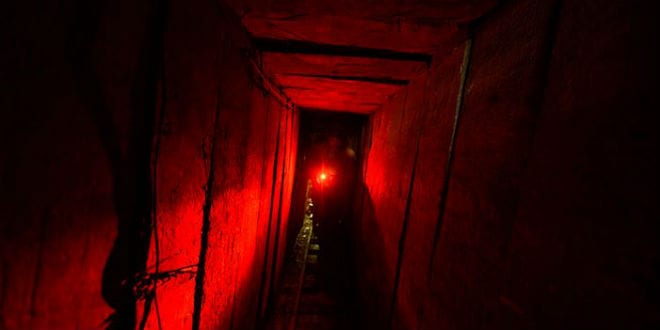 A new, advanced tunnel-detection system, developed by Elbit Systems, will be deployed along the Israel-Gaza border to protect residents from cross-border threats, reported Yedioth Ahronoth. The system was developed over the course of two months and uses precise sensor readings to identify tunnels underground.

Terror tunnels from Gaza into Israel figured prominently in last summer’s Operation Protective Edge, which lasted 50 days. The neutralization of the tunnels was one of the operation’s primary goals. The tunnels had been used in several attacks, including kidnappings, attempted kidnappings, and ambushes over the years.

Hamas announced in October that Israel had failed to shut down its underground network, and has since reportedly expanded its construction efforts to include heavy machinery.

The Elbit system is the first of its kind in the world, developed in record time, in response to the Hamas threat, by the Director of Research and Development in the Defense Ministry, in cooperation with Israeli industries.

The detection system is already at work along sections of the border, but as it comes out of its trial stages, its implementation will be expanded. This will require security and budgetary approval.

Alon Shuster, head of the Sha’ar HaNegev Regional Council, told the news agency he has been closely following the Israel Defense Force’s efforts to locate the tunnels.

“From what we know, these are the fruits of that labor. There is no doubt that the aggressive operations this past summer limited the threat in a significant way for Israel and this advancement gives an additional layer of security for the residents,” he said.

Amit Caspi, of Kibbutz Kerem Shalom – a kibbutz that was directly threatened by Hamas tunnels – said:  “I have no doubt that this will improve the morale and lives of all the residents of the Gaza border community. I hope it will help to save lives and of course to improve our day-to-day routine here.”