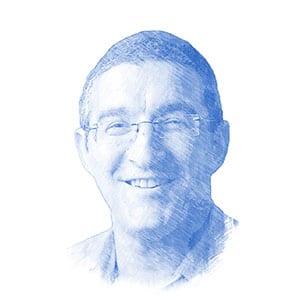 This Yom Haaztmaut let’s not forget the real purpose of redemption.

Each year on Yom Haatzmaut, Israel’s Independence Day, alongside the celebrations, I am reminded that not all Jews see things my way. In the nearby Chareidi (ultra-orthodox) neighborhood in my town of Bet Shemesh, I see black flags hanging from some homes.  Rabbi David Spektor ob”m, a giant in Torah and student of Rav Tzvi Yehuda Kook, once explained it to me as follows – on Yom Haatzmaut we celebrate what the State of Israel is. They hang black flags because of what the State of Israel is not.

Rav Spektor’s insight is not merely a glass half full, glass half empty observation. It runs much deeper.

As a religious Zionist I embrace the perspective that the birth and growth of the State of Israel is a fulfillment of the prophecies of the in-gathering of the exiles and the beginning of the ultimate redemption. Central to this world view is the understanding and belief that the redemption is unfolding naturally and gradually. In the words of Rabbi Haim ben Attar (18th century)- “That a staff (i.e. government) will arise in Israel in the way that nations arise in the world naturally”, or in the words of the Talmud, “Kim’ah, kim’ah” – little by little.

This beautiful and broad historical perspective allows religious Zionists to embrace the external imperfections that accompany gradual historical changes.  For religious non-Zionists, it is not merely the secular aspects of the state that cause them to reject our view. They reject the entire idea that redemption happens through natural gradual processes.  Rather, they envision a future in which at some point in time G-d will flip a switch and suddenly and miraculously redemption will arise in its complete form.  A sudden miraculous redemption is attractive as it is free of ambiguity and the sometimes confusing less than perfect intermediate stages. We, in turn, see the hand of G-d at work in those natural gradual developments.

As Religious Zionists we dare not forget that redemption is not only about us. Jewish sovereignty, the in-gathering of the exiles, a Temple in Jerusalem – all of these are necessary components of the yearned for end of days. That said, redemption for Jews is also about something more.  Rashi, in his commentary to the verse Shema Yisrael comments, “Hashem, who is our G-d now and not the G-d of the idolatrous nations, will one day become the One G-d over all.” Or in the words of Aleinu recited three times daily, “All the inhabitants of the earth will recognize and know that to You every knee shall bow, every tongue shall swear…. And to the honor of Your name they shall grant praise.”

Redemption is ultimately about the world. Redemption’s fullest expression is the shared recognition and praise of G-d by all humanity.

If we are true to our belief that the redemption comes about through gradual natural means, that partial incremental expressions of redemption are part of the process, we must be consistent. We must not limit that perspective to the rebirth of our national presence in the land. The same perspective must be applied to the universal recognition of G-d, the real end game of redemption. Just as we see the flourishing economy and waves of immigration as stages in the redemptive process for our people, we must open our eyes and see that the universal redemption – the recognition of the G-d of Israel by all of humanity – is underway as well. Just as we wonder in frustration at our non-Zionist brothers’ inability to see and appreciate the changes that we see we dare not make the same mistake regarding the redemption of the world.

Over 700 years ago Maimonides described Christianity’s purpose as “paving the way for the Messiah”. I have always been amazed that he could write that at a time when Christianity was anything but friendly to Jews. Maimonides understood that historical processes take a long time to develop. I always wonder what a Jew reading his words in the 12th century must have thought. Today we have the opportunity to experience how right Maimonides was.

Who would have believed – in Maimonides’ time – that there would be millions of Christians who pray for the welfare of the State of Israel, who celebrate the ingathering of our exiles, who see the hand of the G-d of Israel in our booming economy?

The Christian world has changed and is continuing to change. Are their beliefs exactly the same as ours? Certainly not. Are they closer to our vision of universal recognition of G-d than ever before? Most definitely. If the transformation of the nations of the world to a G-d awareness that fulfills our vision of the perfect world is to happen step by step, how would we envision such a transformation any differently?

Another central belief of religious Zionists is that we are not passive participants in the redemptive process; that we are charged with the responsibility to affect history. With this in mind, I will be honored to participate in the Day to Praise on Yom Haatzmaut this year. On this day, Israel Independence Day, Christians will join Jews in thanking the G-d of Israel for the State of Israel. In this way I will proudly participate in my own small way in the ongoing transformation that Maimonides so unrealistically described over 700 years ago.

We who are fortunate to live during the opening stages of the redemption must ask ourselves this question. Do we see and appreciate the gradual incremental steps in this redemption or have we blinded ourselves like our non-Zionist brothers? Do we celebrate and participate in what the transformation of the world is – in how far we have come – or do we only allow ourselves to see what it is not.

“Praise Hashem all nations; exalt Him all peoples! For his love for us is great and the truth of Hashem endures forever.” (Psalms 117:1-2)