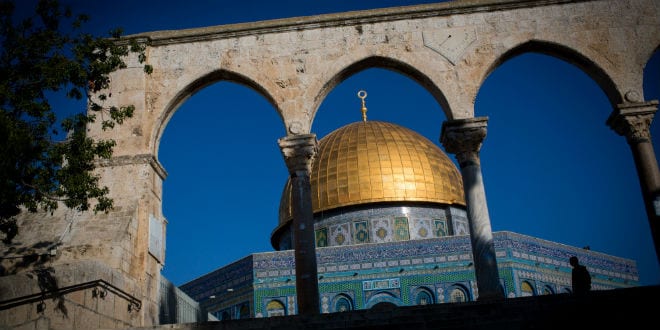 Housing and Construction Minister Uri Ariel (Jewish Home) made an urgent plea to Israeli Prime Minister Benjamin Netanyahu Monday to stop renovations being made on the Temple Mount, Israel Hayom reported. Islamic authorities claim they are changing the carpets in the shrine there.

The Temple Mount is the site upon which the First and Second Temples stood. Today, it is the home of the al-Aqsa mosque and the Dome of the Rock, an important Islamic shrine, and managed by the Islamic Waqf, or religious authority. Jews are granted only limited access and, despite court rulings in their favor, are prevented from praying or performing other religious rituals there. It has long been a flashpoint of Arab-Israeli tensions.

Now, the Waqf has begun work, apparently to change the flooring in the shrine, which has raised concerns for the antiquities buried beneath it. Heavy machinery has been brought to the site, prompting Ariel’s response.

In a letter to Netanyahu, Ariel demanded the government “order an immediate halt to the earthworks to allow a proper review and authorization process.” The matter is urgent, he said, because “this morning [Monday] the Waqf began a renovation project at the Dome of the Rock, the site of the Temple, and this includes re-flooring and potentially additional activities whose nature are unknown, all the while using heavy equipment.

“These works are unprecedented and warrant the review of the Ministerial Committee on Archeological Digs at Holy Sites, and the fact that there is heavy machinery involved makes this all the more pressing,” Ariel continued.

He added that “the State Comptroller’s Office report has already faulted the Waqf for carrying out unauthorized construction that was in violation of the law, flouting the prohibition on operating heavy machinery on the Temple Mount.

“This behavior is once again on display,” he noted.

It should be noted that excavations of the nature being carried out on the Temple Mount require the authorization of both the Israel Antiquities Authority and the Ministerial Committee on Archaeological Digs in Holy Sites, neither of which was obtained. Israel National News cited The joint Temple Mount Movements umbrella organization, HaMateh HaMeshutaf, which reported that such work is liable to irreparably damage the foundations of the Second Temple, which lie beneath the Dome, as well as any artifacts buried there.