Moon Mystery No More: Israeli Researchers Help Solve How the Moon Was Formed 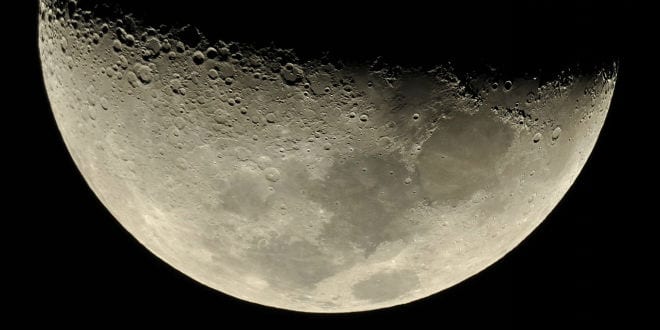 A joint team of researchers from Israel and France have created a computer model which resolves one of the great mysteries of astrophysics: the formation of the moon.

Although a theory called the Great Impact Hypothesis, developed in the 1970s, proposed that the moon formed when the Earth collided with another celestial body roughly the size of Mars, many inconsistencies remained.

Now, the joint study, published last week in the journal Nature, has suggested some resolutions to these inconsistencies, reinforcing the commonly accepted hypothesis.

While the Bible states that God created the moon, it fails to identify how this was done. According to the Great Impact Hypothesis, long ago the Earth collided with a body nicknamed Theia, and the resulting debris from the crash spun out around the Earth until it pulled together to form the moon. The primary challenge to this theory came in 2001, from the study of rocks retrieved by the Apollo missions.

Researchers from the Carnegie Institution of Washington discovered that the moon rocks were chemically similar to Earth, while rocks from other planets had distinct chemical makeups. For this to happen, the compositions of Earth and Theia would need to be similar, since most of the material which would form the moon would have come from the impacting body, not the Earth. However, the Great Impact Hypothesis stated that the likelihood of the colliding bodies being chemically similar is less than one percent.

“In terms of composition, the Earth and moon are almost twins, their compositions differing by at most few parts in a million,” Dr. Alessandra Mastrobuono-Battisti, an astrophysicist at the Technion in Haifa, told Space.com. “This contradiction has cast a long shadow on the giant-impact model.” Mastrobuono-Battisti led the team which conducted the study into the mystery.

To get to the bottom of the matter, Mastrobuono-Battisti, Haggai B. Perets, also of Technion, and Sean N. Raymond, of Universite Bordeaux, created a computerized simulation of 40 “solar systems” and analyzed the data to determine the odds of similar bodies colliding.

They tracked some 85 different stars and more than 1,000 large bodies, determining that colliding bodies actually have a 20-40 percent likelihood of having similar compositions, because they form at similar distances from the sun.

“On average, impactors are more similar to the planets they impact compared with different planets in the same system,” Mastrobuono-Battisti told Discovery News. “Our study was the first to reconsider this issue, now exploring it with large data and…wide range of models.”

“The most exciting and surprising thing was to find out that we can shed new light on a 30-year-old mystery,” Perets was quoted by the Times of Israel as saying. “Compositionally similar planet-impactor pairs are not rare at all.”